The Other Side of Darkness 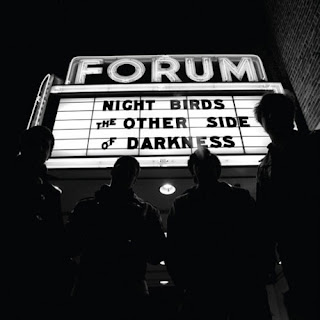 I had been eagerly awaiting the release of Night Birds’ debut album The Other Side of Darkness for a number of months. I was psyched! I was checking on-line for updated release dates on a bi-weekly basis. I kept inspecting the prospective cover art so that my guy at the tattoo shop would have something to work with. I scheduled two vacation days in Mid-September so I could circle dance in my living room and go surfing on the Codorus Creek. Too often in life, such highly anticipated things end up disappointing. There was that date in college with Gina Millaveski, who turned out to be both a bra-stuffer and an obsessed fan of Jesus Jones and EMF. Vanilla Coke was a complete and utter bust. And I’m still waiting for George Lucas to refund the $6 I spent to see The Phantom Menace. But Night Birds - they were not about to let me down. I expected The Other Side of Darkness to be album of the year material, and that’s exactly what it is!

By now it’s been well established that Night Birds fly under the influence of early ‘80s hardcore and surf-punk. But that’s just a frame of reference, not a band-definer. Yeah, these guys have heard their fair share of Adolescents, Agent Orange, and Dead Kennedys records. But they are not copyists. They are very much a band for now. Musically, their 13-songs-in-22-minutes breakneck ferocity is hardly novel. But in combining a slight eeriness with a zany sense of humor and pure hardcore aggression, Night Birds exhibit the kind of distinctiveness that separates great bands from not-so-great bands. Plus they’re just really freaking good at what they do. If you have doubts that punk rock can remain a vital musical form some four decades after The Stooges spat out “I Got A Right”, this album ought to erase them fast. And I do mean fast! Faster and louder? This is IT! While Night Birds’ arsenal is expanding and maturing (a little!), there’s no drop-off in terms of speed or intensity. This record flat-out rips. Invite some friends over and get a circle pit going. Or just crank up the volume to 11 and piss off the neighbors! I always appreciate bands who know how to tap into the zeitgeist of their time – and songs like “Demon Haunted World” and “Paranoid Times” do just that. If this is what punk rock sounds like in the year 2011, then punk’s in damn good shape. Five stars!

F&L did the legwork... DK's, Agent Orange and Adolescents. I see why you afe raving about thus band. They are quite amazing. This song you posted is the shit man... imean, i want this record now. Cool shit.

Love The Night Birds. I need this NOW!