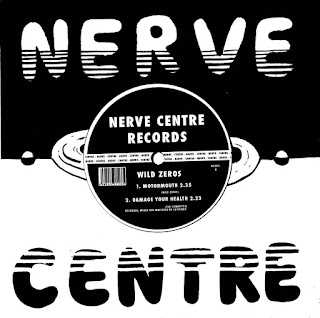 If you didn't know it already, know it now: Nerve Centre Records is one of the rising stars in the world of punk record labels! The label may have begun as a vehicle for Charlie Murphy to release his own bands' music. But having also put out singles by The Hipshakes and now Wild Zeros, Nerve Centre is quickly becoming one of my go-tos for quality punk rock.

Wild Zeros, from Bordeaux, France, recorded Motormouth to celebrate the tenth anniversary of the band's formation. It's the first time we've heard new music from this trio since 2011! Recorded in Toulouse by the great Lo'Spider, these four tracks find Wild Zeros sounding as good as ever. The title track is some good straight-ahead garage punk rock n' roll to get you grooving and shaking. Never mind asking if Wild Zeros can still manage to capture their 2007 sound. They're still stuck in 1997, and thank god for that! That guitar solo is a thing of trash rock beauty. "Damage Your Health" is a cover of late '70s U.K. mod-punks The Cigarettes, done in a style reminiscent of The Infections' version. "Squid Balls" is something you don't hear as much as you used to: a budget rock instrumental! I like it. To finish off the record, "Bare Facts" is probably my favorite track of the four. It's got this trashy '77 punk style that's right up my alley - with handclaps and snotty vocals that really drive it home!

Is it wrong to call Motormouth a "comeback"? Either way, this is killer stuff from a damn fine garage punk band. You get four tracks, and each one stands out in its own way. Those of you in the southwestern part of England should look for a release show in April!