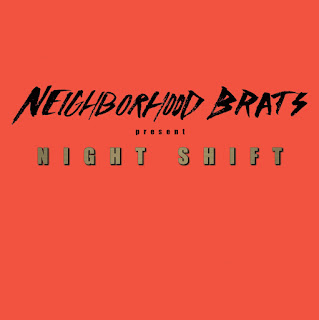 With Neighborhood Brats being one of the finest punk bands of the early 2010s, it was a major bummer when they announced an indefinite hiatus a few years back. Thankfully that hiatus did not turn out to be permanent. It's with great excitement today that I review Neighborhood Brats for the first time in nearly four years! The band's brand-new EP Night Shift is out on Taken By Surprise Records, and it's exactly what you would expect from Jenny, George, and the gang! What we have here are three killer tracks drawing from that 1977-80 golden age of punk. There's no fooling around here - the band simply kicks ass and leaves you wanting more! With a rhythm section (on this release, bassist Tony Teixeira and drummer Mike Shelbourn) that's fully up to the task, Neighborhood Brats have picked up right up where they left off. You can hear a little more of a Saints/Radio Birdman influence in George's slamming guitars, and that can only be a good thing. Jenny, as usual, sings with a power and conviction perfectly suited to the band's blistering attack. "Comfort Women" is the highlight for me - a powerhouse track that rails against the patriarchy both past and present. This is a true punk anthem for our times, and I hope people everywhere will be blasting it loud and heeding its message.

Night Shift is everything I could have hoped for from a new Neighborhood Brats record. If you like aggressive but tuneful punk music, you just won't find anything better. In celebration of the band's return, Taken By Surprise Records has also re-pressed the band's classic 2013 EP Total Dementia (arguably its best record!). The band will be touring Europe in April and May in support of both of these new releases. Click here for tour dates!