Amyl and the Sniffers - Big Attraction & Giddy Up 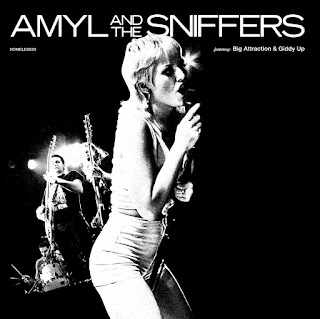 Hearing Melbourne's Amyl and the Sniffers for the first time, I was blown away like I hadn't been in a long time. This is definitely the best new punk group to come down the pike in a good while, and clearly I'm not the only one who has noticed. The band's debut 12", just released in January, has already sold out! If you are unable to track down a vinyl copy, the digital version is an absolute must-own. This release compiles the tracks from the band's first two EPs, released in 2016 and 2017 respectively. If you like old school Aussie punk (hell, who doesn't?!) and aren't yet familiar with Amyl and the Sniffers, you are in for a major treat! The band takes inspiration from both the punk and rock of '70s Australia, bringing with it an energy and attitude that could not sound fresher in 2018. These ten tracks are everything punk music should be - raw, blistering, and beyond all else exciting. The songs are top-notch, and Amy Louise Taylor is a dynamo on lead vocals who will remind you of countless greats of the past. Standout tracks like "I'm Not A Loser", "Mole (Sniff Sniff)", and "70's Street Munchies" absolutely thrill the '77 punk purist in me. But then on songs like "Balaclava Lover Boogie", you can definitely sense the band's love for good old dirty riff rock. Ten tracks leave me wanting more, but fortunately a proper debut album is slated to arrive later this year. I can't wait!

love them. 70s street munchies topped my chart for best song of 2017