The Dirty Truckers - "Best Of" 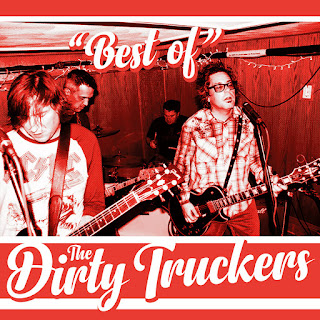 The Dirty Truckers are a band I've referenced a few times, both in reviews of Tom Baker and the Snakes and the Rum Bar Records reissue of the Tiger Stripes EP. I consider The Dirty Truckers to be one of the great American rock n' roll bands of recent times, and I was psyched to hear that Rum Bar was honoring the group with a deluxe best-of compilation. Simply titled "Best Of", this 22-track CD release collects material from all three Dirty Truckers albums: 2001's Bush League Romance, 2006's Washed and Ready, and 2008's Loose In The Joints. It also features cuts from Tiger Stripes, released in 2012. With the above albums only available today in digital formats, "Best Of" is a cool way to own most of the band's essential tracks on a single disc. If you enjoyed Tom Baker and the Snakes' album Lookout Tower last year, I think you'll find The Dirty Truckers to be very much in the same spirit. Nothing fancy here: just solid roots rock n' roll that draws just as much from the Stones and Steve Earle as it does from the Replacements and Soul Asylum. Close your eyes, and you can practically taste the cheap beer and smell the cigarette smoke. Given the international influence of a label like Rum Bar, this is a great opportunity for the rest of the world to discover one of the best-kept secrets of Boston rock n' roll. 22 songs for $10 is one hell of a bang for your buck, and the quality of this collection is just as impressive as the quantity. It really showcases what a fine songwriter Baker is. If you relate more to the rock n' roll side of alt-country, this one's well worth further exploration!