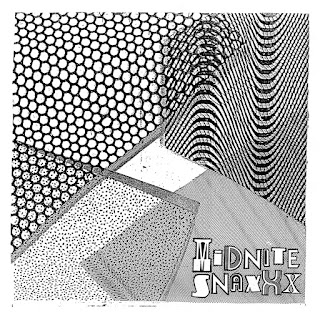 It's no secret that Midnite Snaxxx is one of my favorite bands. So you can imagine that I was more than a little excited about a brand-new single from this Oakland foursome! The screaming and dancing in the street on my part were quite alarming to the neighbors. Perhaps I went too far in setting off those fireworks. I'd been looking forward to this release since the start of the year, and I must say it does not disappoint! Coming out at the end of this month on the always great Goodbye Boozy Records, "Greedy Little Thing" features two original songs recorded by Bart Thurber and cover art by Xerox The Kidd. In typical Snaxxx style, both songs clock in at well under two minutes. Each of these two tunes would have fit in perfectly on the band's brilliant 2017 LP Chew On This. The title track is great straight-ahead catchy punk rock n' roll featuring some tasty lead guitar work. On the flip, "Turf War" is fast, frantic, and fun. Dulcinea's vocal is just terrific, and there are some really neat things going on with the guitars that you don't always hear in the world of garage-punk. I like both songs a lot, but I think I have to give it to the B-side here!

Limited to just 260 copies, "Greedy Little Thing" might not be so easy to come by. It officially releases on March 30th, and the band has already blown through the copies it had available for sale via its Bandcamp page. The digital release is available now and will give you your $2 worth and then some. Another essential release from the Snaxxx!