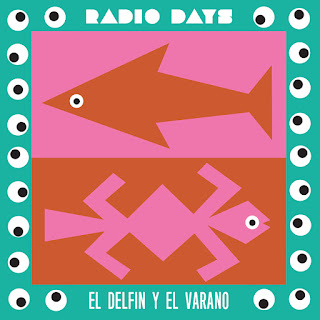 Radio Days, authors of my 2016 album of the year, always make me happy when they release new music. El Delfin Y El Varano is the Italian trio's newest release, an EP out on Clifford Records. It's the band's first new release since last spring's "Haruka" single. Having already made a truly perfect power pop album in the above-referenced Back In The Day, Radio Days really have nowhere to go but forward. With this EP, they show they can branch out from their base style but still sound like that same band we've always loved. Clearly they've been inspired by the 1960s portion of their record collections, and that's not a bad thing at all!

"Time Is Over" is a straight-up garage rocker to open the record. It's a nice jolt of energy to get you up and dancing. That leads into "Sometimes", which takes us back into the pop territory where Radio Days always excel. Of course this band has previously been known to worship at the altar of the Beatles. But with this song, think more 1966-67 Beatles as opposed to '64-'65 Beatles. Here Radio Days affirm what a tremendous pop band they are, slowing down the tempo and really letting their melodies shine. This is beautiful, sophisticated pop done splendidly. Similarly, a cover of the Ramones' "I Wanna Be Your Boyfriend" is so elegant and dreamy that it's barely recognizable from the original. What a wonderful interpretation! Then to close the EP, "El Delfin Y El Varano" is a top-notch surf rock instrumental that highlights this band's formidable musical chops.

Not content to just stay in the power pop lane, Radio Days are really showing the talent and musical skill to transcend genres. It's one thing to try new things, but genuinely succeeding at them is something else entirely. El Delfin Y El Varano is an absolute success for Radio Days. "Sometimes" is one of the best songs these guys have ever done, and that Ramones cover is a stunner. Bring on the next album!