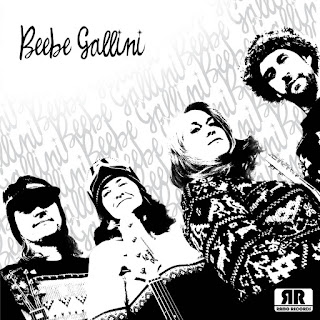 A lot has happened since I first reported on Beebe Gallini back in those innocent times of 2016. The band has gone through some lineup changes, and its fine debut recording has mysteriously disappeared from cyberspace. The wonderful news is that the band now has a really spiffy web site and has just released its first single that you can listen to on a record player! The always amazing Miss Georgia Peach is still out front on guitar and vocals, and boy is she sounding great! Our man Travis Ramin, who needs no introduction, is now on lead guitar. Amy Larson Pearson (Brits Out of America, Strumpet, Mexican Taxi, Brownstar) is on bass, and Chris Audette (Karma Sluts, The Goochers, Devil's Kettle) is on drums. So what we have is a new lineup but still the same Beebe Gallini. If you're in the vicinity of the upper Midwest and want to catch some goodtime garage rock with soul and girl group inspirations, this band needs to be on your must-see list.

I like this debut single because it highlights the band's dual mastery of crowd-pleasing covers and first-rate original songs. A-side "East Side Story", of course, was the first regional hit for a fella named Bob Seger way back in 1966. Beebe Gallini's version here is mostly faithful to the original, but Georgia's powerhouse vocal definitely adds a lot. This is some straight-up dirty garage rock to get you up and moving, and that guitar solo is wicked! On the flip, "The River Flows" is an original number penned by Amy Larson Pearson. It really slows down the tempo and works the band's soulful side. This is a really unique sounding song for a garage band - almost like a psychedelic spiritual or something like that. The band shows off some hot chops, and I believe every word of that vocal. The song is so well-written that I wouldn't have argued if you'd told me it was some long lost gem from 1967. But that's essentially the appeal of Beebe Gallini - they make '60s covers sound fresh and write original songs that sound like they could be '60s covers! I highly recommend this single and also suggest perusing the band's web site. I love that they're selling Beebe Gallini pom pom hats - truly a brilliant idea for a band based in frigid Minnesota!

$1 gets you the digital version of this first single from Beebe Gallini. Buy the actual record, and you also get a download card for a couple bonus tracks! Either way, it's a win for everyone. Dance!