The SUCK - self titled EP 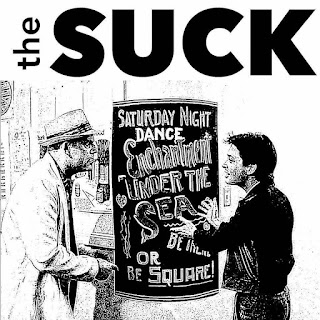 After months of rumors, speculation, titillating mystery, and zealous anticipation, it is just about time for the world to behold the almighty street rock of the SUCK. Who are the SUCK? What is street rock? We finally have answers!

Based in Harrisburg, PA (a mere 25 miles from Faster and Louder HQ), the SUCK is a veritable supergroup of Ramonescore/pop-punk. You may recognize famed personnel from the likes of The Lebowskis and Saturday Night Kids. Some of these guys have been in the game so long that I might have been writing about their bands as far back as 1995 (remember Explosive Kate? Aliens and Strangers?). The SUCK brings to mind HEAD if they were obsessed with the popular culture of the late '70s and early '80s. You can call it pop-punk or Ramonescore, and you wouldn't be wrong (these guys even cover the NECK classic "Lights Out"). But "street rock" most perfectly describes what the SUCK is all about. Upon hearing the band's smash hit "Biff", I envisioned a gang of teenage hoodlums parading through urban ruins in 1979 vintage Technicolor. I was able to get an advance listen to the band's full debut EP (let's just say that I know a guy...), and I have to say that the rest of the record is of the same caliber. "Drinking" combines two of the great themes in pop-punk: heartbreak and, uh, drinking! If you're into the tougher-sounding side of pop-punk, you'll dig this one! The cover of "Lights Out" is great. I would ordinarily say that I hope this version will compel people to seek out the original. But honestly, I think most people who are going to like the SUCK are already well-aware of the greatness of NECK! "All We Know" was co-written by Jimmy Vapid and is the most "pop" song on the album (that's a good thing!). It really closes the EP in a triumphant/anthemic fashion. And just like that, the SUCK leave you wanting more! Yes, we all know what kind of music this is. These guys wear their influences on their (leather jacketed) sleeves. But when it comes to this style of band, I've not heard many that do it as well as the SUCK. The songs are genuinely memorable, and I'd be hard-pressed to name anything I've heard lately that's more fun to listen to. Makes me feel like I'm 22 again!

Ellie and Johnny Problem are reviving their Route 13 Recordings imprint for the release of the SUCK's debut EP. Pre-ordering information will be posted soon on the band's Facebook page. So be sure to like it and follow if you dig "Biff". Street rock is poised to take over the world!