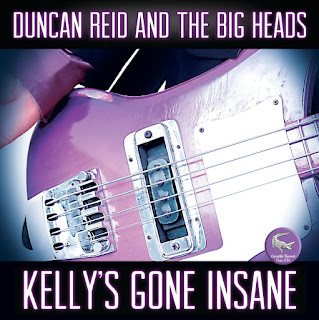 How about some "heavy melody power pop punk" from the co-lead singer of one of the greatest bands of all-time? Count me in! When it comes to the pop side of original era punk rock, I put no band above The Boys except the Ramones. Forty-some years later, Boys singer/bassist Duncan Reid is again making some of the best punky power pop music out there with his current band the Big Heads. With the Big Heads, Reid has now released three LPs with a fourth in the works. The first of those albums, 2012's Little Big Head, is getting the reissue treatment on splatter vinyl with bonus tracks. To go with this reissue, the band is releasing a new 7" single with our friends Crocodile Records. The A-side is "Kelly's Gone Insane" - a track off of Little Big Head. It's backed by "Pretty Little Rachel" and "Baby Baby". The former was previously available only as a digital bonus track. The latter, to the best of my knowledge, is previously unreleased. "Kelly's Gone Insane" is one of the band's most popular numbers and was a natural choice for a single. It really highlights Reid's skills as a songwriter - as he takes very dark subject matter and still manages to turn out a song that's totally catchy and irresistible. "Pretty Little Rachel" is classic power pop in both a musical and spiritual sense, drawing from '60s pop influences and spinning a timeless tale of a man's powerlessness in the face of female beauty. "Baby Baby" might be the true gem of the lot. You can hear strains of The Boys on this track for sure, and that hook is worth its weight in gold.

The mere fact that Duncan Reid is still making music in the 2010s is a wonderful thing. What's even better is that he's making music of exceptional quality. This is one of the legends of power pop leaning punk (or vice versa), and he has not strayed far from his wheelhouse. Perhaps at this point it's a little less punk and a little more power pop. But isn't that where The Boys were already headed by the turn of the '80s? If you are a fan of The Boys or just great melody-driven pop in general, "Kelly's Gone Insane" makes for a fine introduction to Duncan Reid and the Big Heads. It officially releases Monday and will be limited to just 300 copies. This one will move fast, so be sure to hit up Crocodile Records on Facebook for ordering information!

Wow. I am flattered. Thank you very much. Did you catch us in Philly last summer?

Tho a Boys fanatic eons ago, and that Box Number off their 1st LP remains an top25 all-time favorite song (& sung by Kid himself), I wasn't aware of Reid's subsequent releases. Mucho thanks for the heads up.

Thnks for catching up with me George. More info here: https://duncanreidandthebigheads.com/

It was expected, Duncan is Class A song writer and performer (and funny as hell). AND THE BIG HEADS ROCK !!!