Pat Todd & The Rankoutsiders - The Past Came Callin' 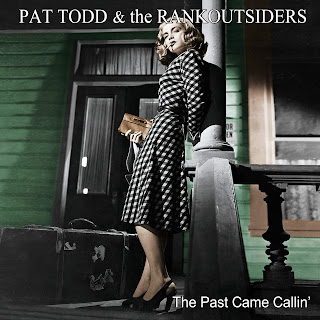 Can it be that Pat Todd's "new" band has now been around for 15 years? Well, the math sure doesn't lie! Pile a couple of decades of the Lazy Cowgirls on top of that, and you're talking about a guy who's been one of our finest rock n' roll songwriters for 35 years and counting. And here's the thing: Pat Todd in 2019 isn't resting on his laurels. With the Rankoutsiders, he's been making some of the best records of his life. And new album The Past Came Callin' is a perfect case in point. It's the fifth album from Pat Todd & the Rankoutsiders - and the second to be released on Hound Gawd! Records. Like any top-notch songwriter, Todd will go to great lengths to preserve his musical inspirations. A few of the songs on this release were written many years ago but for varying reasons were never recorded. With this album, Todd found the perfect spot for these old songs to fit. And together with some terrific new material, they showcase one of the great overlooked treasures in American rock n' roll. As always, Todd and his band-mates stick to the tried-and-true blueprint of roots rock n' roll and country. There's nothing fancy going on here: just tremendous songwriting and first-rate playing from the best damn bar band you could ever hope to hear. Backing Todd on this release are Nick Alexander on guitar, Kevin Keller on guitar, Steven Vigh on bass, and Walter Phelan on drums.

Kicking off with the quintessential Rankoutsiders rocker "If Only I Could Fly Backwards In Time", The Past Came Callin' is not without its scorching moments. "The Ballad Of Crystal Valladares" is a raucous barroom blaster that brings to mind kindred spirits Supersuckers. "Goin' Nowhere" was resurrected from the 14th & Nowhere sessions and packs the expected punch. But many of the album's finest tracks veer from the frenzied punk rock n' roll you might associate with this band and label. I love hearing the Rankoutsiders take the foot off the pedal and show total mastery of country/western, ballads, and middle of the road heartland rock. "Call You On Sunday Night" sounds like it ought to already be a fixture on dive bar jukeboxes all across middle America. "Run" is a song you can play for your Jimmy Buffett loving friends in hopes of turning them to the light side of the force. "Yeah, Ya Had A Bad Night" is finally seeing the light of day after two decades, and I can't listen to it without imagining crowds singing along in unison as they hoist their beers. And one thing I respect about Todd is his willingness to put his own spin on existing songs. "Down In Old Boerne" is an old Texas folk song receiving the Rankoutsiders treatment. The band's version of William Bell's 1962 Stax side "Any Other Way" might be my favorite track on the whole album. "Idle Time", written by Dale Hollon of Sons of Hercules, is breezy country rock fit for 1970s radio. "Somewhere Down The Line" is, of course, an old Lazy Cowgirls song. It was re-recorded because of how perfectly it fits this particular band.

Working again with producer Earle Mankey, Pat Todd has crafted yet another stellar addition to his catalog. The man is one of our great American songwriters, and he's backed by a band that can rock the hell out of even his most reflective material. The Past Came Callin' is such a fitting album title because it reflects both the life experience that inspired a lot of these lyrics and the fact that some of these songs had been lingering in Todd's mind for years. This is just a brilliant album from start to finish - an essential purchase for both longtime fans and anyone who enjoys good, solid rock n' roll with a country influence.