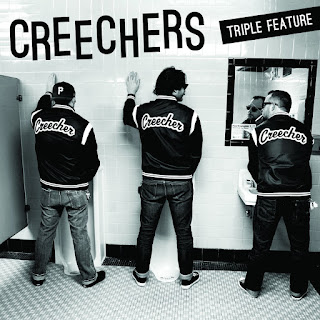 It had been a while since I'd heard some really good budget rock. Well Creechers sure fixed that! The Pittsburgh trio, featuring members of The Spectres, will be releasing a lathe-cut EP called Triple Feature later this month. I've reviewed The Spectres a couple times in the past, and Creechers are cut from similar cloth. I'd say the difference is that Creechers are a little on the poppier side of budget rock. You know I've got no complaints about that! From the opening strains of "Knife Stick", this EP gets my toes tapping and my head bobbing. "Get With You" would fit right in on any budget rock comp tape you made for yourself in 1992. "Get Off The Phone" is not a Heartbreakers cover, but it sounds like it could be. What a fun record! Sloppy and poppy is damn sure how I like my garage rock! Release party for the lathe-cut EP is on June 22nd at Babyland in Pittsburgh. Any copies not sold that night will be made available on Bandcamp the next day. Download is available now for just three bucks. I told you it was budget rock!