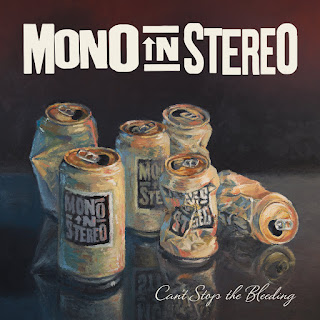 If Rum Bar Records did not intentionally release Mono In Stereo's new EP on the first day of summer, then that was one hell of a coincidence! Out today, Can't Stop the Bleeding sounds like it was made for those warm afternoons you spend on the porch guzzling cold beer and shooting the shit with your pals. Arriving four years after the band's terrific debut album Long For Yesterday, these five tracks hit that spot where the great American rock n' roll of Bruce Springsteen and Tom Petty intersects with '80s/'90s Midwestern punk. Mono In Stereo has a reputation for writing anthemic songs, and the band wastes no time delivering more on this EP. Right out of the gates, punchy rocker "The Conversation" hits you with a chorus that you'll be hard-pressed to resist singing along with at the top of your lungs. Given all of the heart, passion, and conviction that these guys put into their music, their knack for writing quality songs sometimes gets overlooked. It shouldn't. If you're looking for hooks, "The Conversation" has sure got 'em! And I really dig the lyrics. You get the gist of what's going on, but there's enough room for interpretation that you can apply this song to your own life. "Different Kind Of Man" is vintage Mono In Stereo right down to the culminating "whoa oh" chanting, while "Not Your Fault" finds the band embracing the classic American power pop sound you might expect from a group hailing from Rockford, Illinois. Those three songs alone would have made a fine EP. But Can't Stop the Bleeding manages to save its best for last. It finishes strong with a couple of fist-raising anthems - "Fores" and the title track. "Fores" is the band's most powerful song to date - an impassioned cry of support for the LGBTQ community and its ongoing fight for equality. It skillfully appropriates an iconic rock riff - whose author is fully acknowledged in the songwriting credits. As a fan of music that celebrates and catalyzes positive social change, I choose to believe "Fores" can play some small role in the betterment of all humanity. I dream of living in a world where the words "You're not alone!" are being chanted in the streets. Closing track "Can't Stop the Bleeding (Send Me Away)" is not so much a ballad as it is a battle hymn. Its gruff-voiced sincerity is nothing unusual for modern-day punk rock, but it rises above the ordinary on the strength of a rousing chorus and an indelible melody.

Call it dad rock, call it heartland punk, call it Americana rock n' roll, call it whatever: the music of Mono In Stereo is proof that "mature" rock can still pack a punch. This band still cranks up the guitars and approaches songwriting like it's trying to move mountains. These guys demonstrate that getting older (I can say it because I'm their same age!) doesn't have to mean surrendering your passion or the urgency of your mission. I went into this release expecting anthems, and I was not let down. And let's be honest: they pretty much had me with the cover art!