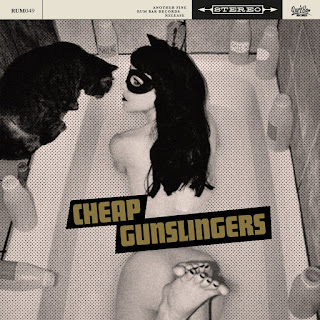 Now here was a pleasant surprise! When I heard that Edo McGrady (Gotohells) had formed a new band that was releasing an album on Rum Bar Records, I figured it would be really good. I wasn't wrong, but this band ended up being good in ways I didn't quite expect. You can still hear strains of Gotohells style greasy punk rock n' roll in Cheap Gunslingers alongside hints of glam and rhythm & blues. But perhaps the biggest inspiration for this Florida/North Carolina based band is early American punk and proto-punk. And you know that's a real sweet spot for me! Cheap Gunslingers sound like a band birthed under the heavy influence of the Velvet Underground, Stooges, and Ramones. McGrady on vocals is equal parts Iggy, Lou, and Johnny Thunders. You've heard of '77 punk...maybe Cheap Gunslingers are more like '75 punk! It's just really neat to hear a band in 2019 that can write an entirely original song based off of the chord progression from "I Wanna Be Your Boyfriend". And the "Radio on!" refrain in opening track "Record Store" has got to be a tip of the cap to the Modern Lovers!

With the band philosophy of "rock n' roll should sound like you're running from the cops!", Cheap Gunslingers really take it back to a time when the idea of "polished" sounding punk rock would have been heresy. They keep it raw and simple. While the songwriting approach is based on quality hooks and a love for traditional rock n' roll, there's just something tremendously satisfying about the band's minimalist execution. Even with many decades of combined musical experience represented in this group, Cheap Gunslingers bash through these tunes without any regard for proper musicianship or any need for a fourth chord. "Record Store", a Saints by the way of Stooges style ripper, has this album crackling right out of the gate. It's a song about rock n' roll being everything in life, and appropriately it's worthy of being cranked loud in the car wherever you may be headed. "Good Time" proves that blatant Ramones thievery doesn't have to result in a song you've heard 500 times before. "Three Chords" is a perfect summation of this band's reason for existing. "Run Girl" puts a grim, confessional spin on '60s teen tragedy rock. "Please Kill Me" is an absolutely electric Rolling Stones inspired rocker. And while this record is a mostly thumping affair, McGrady turns out a couple of superb ballads in "Water Table Line" and "Bars of the Song".

Cheap Gunslingers slot perfectly onto the Rum Bar Records roster along side kindred spirits Indonesian Junk - sounding like they might have just crawled out of the bowels of CBGB circa 45 years ago. The band's debut album is stripped-down punk rock n' roll at its finest. And yet none of that stripping down obscures the quality of the songwriting. This a damn solid record from track one all the way through track ten. Gotohells, in comparison to similar bands of their time, have held up better than most. And while Edo McGrady has never really received his due acclaim, perhaps now is his time.