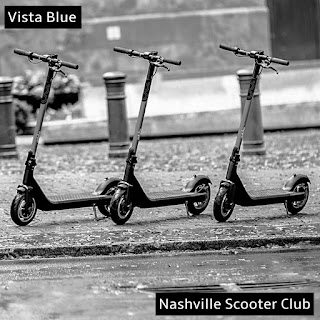 As Vista Blue creeps closer and closer to becoming the first band to be reviewed 20 times on F & L (the number is now up to 18), I feel like preparations must now be made for a proper commemoration of this milestone. I'm thinking trading cards, a fully sanctioned gumbo eating contest, a line of action figures, and the formation of a baseball punk super group called Ban the WAR. Luckily I will have some time to hammer out all of the details. Vista Blue is slowing down its release schedule for a while as the band works on its "Hit the Floor" 7" and not one but two new full-length albums. In the meantime, you can now enjoy another free digital single from VB. "Nashville Scooter Club" is a humorous ode to the current prevalence of electric scooters in the streets of Nashville. It's got that bargain basement Beach Boys vibe this band is so known for. While this song was written with Nashville in mind, I think anyone who dwells in a "cool" city will get a chuckle out of this one. As always, I really admire this band's ability to goof on things in a totally non mean-spirited way. And seriously: who WOULDN'T want to join a scooter club? The first rule of scooter club is to always talk about scooter club!

Next up for Vista Blue: a Halloween-themed album coming out on Ratgirl and OUTLOUD! Records. And the forthcoming "Hit The Floor" will be the fruit of a recording session at the legendary Ardent Studios in Memphis. In the meantime, the band's Around the World split CD with The Barbecuties, Screaming Dogs, and Los Padrinos is now available for purchase from Radiant Radish Records. 18 reviews in, and I still haven't accidentally typed Vista Blue's name as "Vida Blue". Now that's quality control!