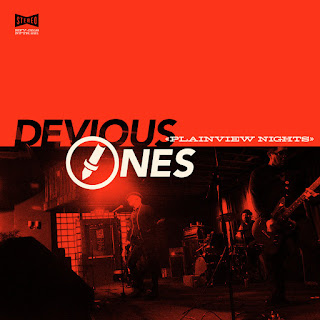 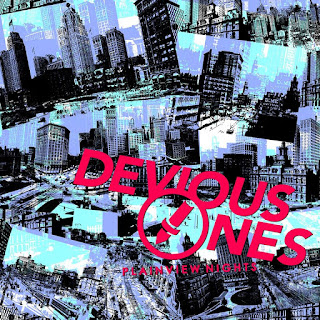 There are few things in life better than getting totally floored by an album that you've been looking forward to for a really long time! I've been a huge fan of Devious Ones going back to 2015, and the Detroit foursome's debut full-length was one of my most-highly anticipated LPs of this year. True to form, the band has stepped up to the plate and knocked it out of the park! A co-release between Hold Fast Vinyl in the U.S. and No Front Teeth Records in the U.K., Plainview Nights sets the bar for what power pop influenced punk rock ought to be in 2018. This album couldn't be any more up my alley, and song-wise this is Devious Ones' best stuff to date.

On the heels of three seven-inches and a self-titled cassette, Devious Ones could have taken the easy way out and re-recorded a whole bunch of old songs. Instead, they chose to go almost entirely with new material. "Djarum Summers" is the only 7" track to reappear on Plainview Nights. The rest of the tracks are previously unreleased with the exception of last year's digital-only single "Rust Is Imminent". It's no secret that I'm a huge '77 punk and power pop guy, and this album is a perfect example of what that musical style sounds like when it's done well. These 10 tracks brim with energy and pack a tremendous punch - with knockout hooks to boot. From the songwriting to the production to the sheer tightness of the band, everything about this record is on point. If you're craving great straight-forward powerpop/punk, songs like "Eyes Off You" and "Young Relic" will totally hit the spot. Elsewhere the band works elements of garage rock ("GarbagePicker"), '60s pop ("My Romance [In Somnambulance]"), and rootsy rock ("Southwest Sunrise") into its catchy punk attack. The high point for me is the title track: a four-and-a-half minute toe-tapper that merits instant anthem status. I first heard this track two weeks ago, and I've been whistling that melody and singing that hook ever since. If this album is Devious Ones' love letter to Detroit and the Midwest, then "Plainview Nights" is clearly its centerpiece. And the equally anthemic "Rust Is Imminent" adds the exclamation point.

Devious Ones are that rare band that can pull off first wave inspired punk without making their influences too obvious. They don't really sound like any other band. Heck, they don't even sound like any of their own bands! It has been a pleasure to follow Devious Ones' ascension from promising up-and-comers to truly one of the best punk groups on Earth. Plainview Nights is the band at the very top of its game, delivering an A+ debut album. The American LP release is limited to 500 copies and can be ordered here. Locals can pick up a copy at the LP release party tomorrow night at Sanctuary Detroit in Hamtramck. Doors open at 8:00!