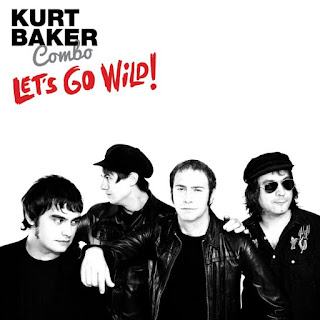 Seeing the title Let's Go Wild!, you can quickly surmise that the new Kurt Baker Combo album is not exactly heavy on ballads. When I reviewed the Combo's last album In Orbit back in 2016, I talked about it being the most rockin' Kurt Baker release to date. Well apparently that was just a warm-up for Let's Go Wild!

I had read somewhere that with this album, Baker was heavily influenced by contemporary bands like White Reaper and Death By Unga Bunga. That got me very intrigued, because that big hooky rock thing is something I particularly enjoy. And with a high energy garage rock n' roll force like the Combo backing him, Baker was in perfect position to kick up the rock another notch or two. Lead single "So Lonely" (a cover of a 1980 B-side by Swedish band The Radio) will thrill the garage purists who've come to love the Combo in recent years. It sounds like the 1964 Beatles stepping off a time machine to meet up with Elvis Costello and The Attractions. It's a thrilling, joyful jolt of rock n' roll (even with the sad lyrics). In the past, Baker has proven that he's not afraid to open an album with a cover. That works again here so well. What a way to kick off a record! "Foolish Stuff" follows in a similarly dance-inducing manner, then the tuneful hard rock of "No Fun At All" suddenly finds The Combo ready for the arena. From there, the album offers up plenty of variety with no shortage of hooks. "Beg to Borrow" finds Baker unleashing his inner Phil Lynott, while "Let's Go Wild!" is The Combo's stab at a stomping glam rock instrumental. "Don't Say I Didn't Warn Ya" and the terrific "Sick Of Waiting" are the big crushing power pop numbers I was hoping to hear on this album. They do not disappoint! Perhaps the best track of them all is "Yesterday Today" - an infectious pop/soul shaker that really highlights the Combo's instrumental chops.

Let's Go Wild! is just awesome! What I love about the album is that it fully captures what the Kurt Baker Combo is all about. It's a high-spirited and thoroughly enjoyable rock n' roll record. Put it on, and immediately you get a feel for what it's like to experience the Combo live. It's got plenty to offer fans of garage rock and power pop while also tapping into Baker's love for bands like Cheap Trick and Kix. This is definitely the Combo's best album yet! Get it today from Steven Van Zandt's Wicked Cool Records!