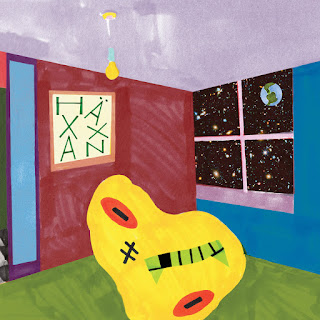 The Slovenly Recordings winning streak remains very much in tact with the terrific sophomore LP from Israeli trio Häxxan. A title like The Magnificent Planet of Alien Vampiro II promises something pretty remarkable, and the album delivers just that! While Häxxan generally fits the garage/psych genre of music, this is one of those releases that cannot be properly categorized. It's all over the place in an entirely good way. On "Intro", the band comes on like a heavy riffing power trio with chops for days (that drumming is unreal!). A single lyric is repeated over and over: "Open up your mind/What you gonna find?" I'd say that qualifies as a mission statement, and it's damn good policy in the year 2018! The band takes a quick turn towards straight-ahead hooky punk on "Jeff Casanova", then nails the indie rock thing with the loud/soft dynamics and sneaky catchy melody of "Silkworms". Up next is "Circle Of Quantum", an instrumental so rocking and riveting that words would have ruined it. So now I've mentioned the entire first half of the album, and none of these tracks are quite what you'd expect from a psychedelic garage band. I like that! Fear not, though. The back half of the album offers up plenty of garage and psych for you to sink your teeth into. "Nothing Ever Changes" is a snappy number that ought to have Black Lips fans bobbing their heads in approval (no complaints about that chord progression reminding me of "Sonic Reducer"!). And the band's musical chops shine again on the nine-minute epic "Hunter" - a plunge into deep psychedelia that seems to take as much from Black Sabbath as it does from Ty Segall.

With Häxxan being so well recognized as a live force, there will always be the question of whether or not its recorded output measures up. In the case of this release, I'd say it absolutely does. If you've never seen Häxxan live, The Magnificent Planet of Alien Vampiro II will make you wish you had. On tracks like "Intro" and "Circle Of Quantum", it feels like the band is right there in the room with you and kicking all kinds of ass. Other songs highlight a songwriting prowess that is clearly a cut above. Of course I could pitch this album directly to the garage crowd, but it seems more appropriate to recommend it to anyone who wants to hear some wonderful rock n' roll. Big thumbs up!