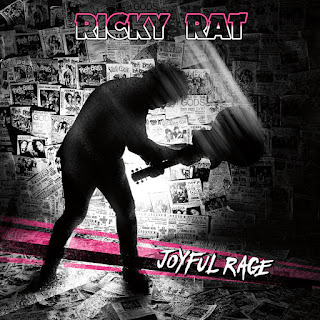 Ricky Rat is an all-time great in my book. When melody in punk music was all but dead in the late '80s, his legendary Trash Brats kept the faith with a first generation punk sound forged under the influence of glam and power pop. Detroit's favorite sons, Trash Brats were at the forefront of the '77 and glam punk revivals of the '90s - releasing the classic albums The Joke's On You and Out of the Closet. Two decades later, guitarist Ricky Rat hasn't altered his musical mission in the slightest. As a solo artist, he remains fixed on that sweet spot where the Ramones, Generation X, and New York Dolls intersect. Joyful Rage, his brand-new 12" EP, is his finest solo work to date.

Recorded with the best backing band in the Midwest (Max Colliva, Brian McCarty, Troy Toma), the six-track Joyful Rage is vintage Ricky Rat. It's punk rock for people who love pop, and it's pop for people who love punk rock. All the songs play to Rat's strengths- his melodic style of guitar playing and undeniable flair for writing hook-laden punk songs. Lyrically, this release leans towards personal reflections on the past that will definitely strike a chord with most fans. "Hey Remember" is an anthem for all of us '70s kids who grew up on cool music, while the brilliant closing track "Bad Pictures" makes a wonderfully profound observation about life. Even when the songs are pretty much pure pop (like "Virtual Kiss"), Rat's everyman vocals and undying belief in the power of three chords keep things firmly in the spirit of first wave punk rock. I really don't have to tell you why Ricky Rat is one of my favorite guitar players - these songs make the point far more eloquently than I ever could! Joyful Rage is guaranteed to delight old fans...and win over a whole lot of new ones as well! Hit up Bellayache Records to order a copy on pink or black vinyl!