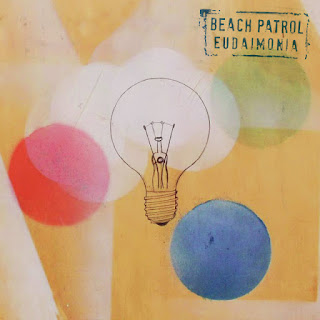 I love it when an old favorite band becomes a new favorite band! A decade ago, a young group out of Green Bay came seemingly out of nowhere to capture my album of the year award for 2006. That band was Beach Patrol, and that debut LP It's Only Greener 'Til You Get There remains one of those albums that I always go back to. If I have any regrets about my "retirement" from music reviewing circa 2008-11, it's that I missed the chance to spread the word about Beach Patrol's second and third albums (both excellent, by the way). Luckily, I now get a shot at making up for lost time. Beach Patrol recently released a new album called Eudaimonia on Barely Standing Records, and I think it's by far the best thing the band has ever done.

Over the course of a decade, Beach Patrol has progressed from a very good band to a genuinely great one. And that process culminates on this album - a remarkable effort that I hope will finally place Domenic Marcantonio in the thick of the "best songwriters out there" conversation. Beach Patrol hasn't outgrown its power pop roots so much as it as expanded off of them. While Eudaimonia is immediately recognizable as a Beach Patrol record, it's clear that the band benefits from a wider array of musical influences and the wisdom of added life experience. You get the best of two worlds on this release: the heart of a singer/songwriter and the guts of a Midwestern bar band. Marcantonio has always possessed a keen ear for melody and a deft touch with hooks. But what strikes me about these 12 songs is how much of himself he has put into them. He's telling his own story in such a way that listeners will relate it to their own lives. And that, to me, is the true mark of a great songwriter.

While I wouldn't quite call Eudaimonia a "concept" album, I believe the title is very significant. If there's an underlying theme to these songs, it's that positive actions contribute to happiness. You can just feel the narrative working its way towards a triumphant conclusion. But don't think for a second that this album gets bogged down in philosophy. First and foremost, Beach Patrol is a rock n' roll band. And the group has never rocked harder! Musical influences encompass everything from '60s pop to soul to country to heartland rock to roots rock n' roll. This is one of those rare albums that starts off great and just keeps getting better - highlighted by superb mid-point tracks like "Flower In The Dark" and "Motor". And the record saves three of its very best songs for an awesomely climactic stretch run. "The Big If" is a punchy barroom rocker that will have you singing along and bobbing your head like a fool, while the terrific lead single "I Am Smiling Because I'm Happy" marries Memphis soul to '70s Stones. A turn to pure pop melody on the lovely "This Is Happening" further evidences the impressive range of the band's repertoire. Given that this is the first Beach Patrol album in six years, I expected Marcantonio to deliver a strong batch of songs. And, boy, did he ever!


At this point, it's looking highly probable that I will be honoring Beach Patrol with another album of the year title. Eudaimonia is darn close to a flawless record. It's gonna take something special to top it! The album is available now on CD from Barely Standing Records. Vinyl will be out soon. If you're still unfamiliar with Beach Patrol, be sure to check out the band's first three albums via its YouTube channel. This is a band you don't want to miss!

Thanks for the excellent review!