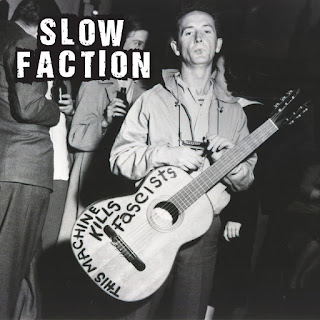 A couple months ago, I had to admit to the world that I had just gotten hip to Slow Faction. Hearing the London outfit's most recent demo and prior recordings, I definitely had a "Where has this band been all my life?!" moment. So of course I was paying attention to make sure that no further releases escaped my detection! On that note, I offer my highest recommendation to the band's brand-new EP This Machine Kills Fascists. Slow Faction is a band carrying on the good fight of The Clash - right down to the tried-and-true '77 style punk sound and lyrics that have insightful things to say about society and contemporary politics. As the band so astutely points out, the clampdown The Clash foresaw is happening right now. It's as true on Slow Faction's side of the pond as it is on mine. Now more than ever, we need those bands that ignite the flames of dissent and stick their necks out for what they believe is right. And while "political punk" is often heavy on the politics and light on quality tunes, Slow Faction understands that the message resonates more powerfully when the songs are great. Isn't that the lesson we learned from Angelic Upstarts, The Alarm, Stiff Little Fingers, etc.?

Throughout this outstanding EP, Slow Faction has a great deal to say about the state of the world. Whether the band is railing against the objectification of women ("Stupid") or skewering a culture that makes a televised spectacle out of manufacturing pop stars ("D-Lister"), its message is on-point and driven by genuine conviction. And the songwriting and production are top-notch. I love a band that aspires to write anthems, and lead track "Woody Guthrie" is precisely that. It's not just a tribute to the greatest protest singer that humanity has ever known - it's also a call for a new generation to rally against the forces that oppress. The band delivers its point with passion, urgency, and a chorus that was seemingly made for mass sing-alongs. If this song doesn't get you fired up to go out into the world and make a difference, I don't know what will! Woody and Joe would be proud.