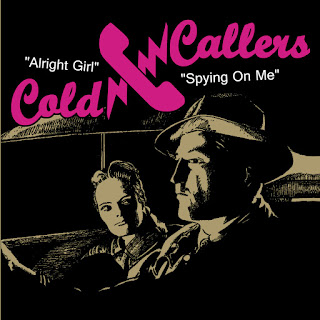 Supergroup alert! Cold Callers feature Marco from No Front Teeth Records, The Gaggers, Miscalculations, Disco Lepers, etc. teaming up with members of Los Pepes (one of my five favorite bands of the moment!). The band recently released its debut single: "Alright Girl" b/w "Spying On Me". I continue to marvel at how Marco can have dozens of projects going at the same time and still manage to have them all sound a little different. Cold Callers are one of the most unique bands I've heard in a while. Essentially they're playing '60s inspired jangly power pop, but there are hints of post-punk and psychedelia coming through as well. The A-side takes it back to the roots of power pop - bringing to mind early to mid '60s Who and Brit-obsessed American garage bands like The Choir. I dig! "Spying On Me" is in a somewhat similar vein but more overtly post-punk influenced. I'd describe the mood of the song as alluringly creepy. It's haunting yet quite beautiful. This could almost be a Miscalculations song!

All in all, this is a fantastic debut single from Cold Callers. Both songs are really sticking in my head. Get the vinyl from Wanda Records!