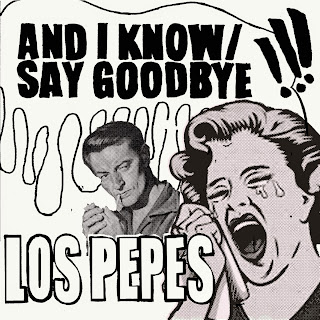 So who's my #1 favorite band on the planet? I'd say it's a close contest between a handful of candidates. I haven't had an "official" favorite band in a while - possibly because there are just so many amazing groups out there right now. How could I pick just one? But I will say that on the strength of their new EP, London's Los Pepes are meriting serious consideration for that top spot and the numerous glories it entails.

Having already released one of my favorite albums of recent memory, Los Pepes are back with four more songs that would have fit in splendidly on that record. It's like they weren't satisfied with making a perfect powerpop/punk album and decided a proper encore was necessary! "And I Know"/"Say Goodbye" is the name of the new EP. You can stream it now over at Los Pepes' Bandcamp, and it will soon be available on vinyl from Wanda Records. Again the band combines the sweetest pop melodies with a primal rush of loud guitars and smashing drums. What more do you need in life? The influence of the Buzzcocks ("And I Know") and Undertones ("Popular Rules") is immediately recognizable, and surely this record could be mistaken for a buried punk treasure unearthed from the vaults of 1979. If these songs were any catchier, the World Health Organization would have issued a warning sticker. "Say Goodbye" is probably the most pleasantly surprising track - its slower tempo and gorgeous harmonies channeling the best of early '70s power pop. That guitar solo is a thing of beauty!

Alright! If you enjoy high-energy powerpop/punk that you can dance to all night long, Los Pepes need to be on your radar. And I urge all my European friends to catch these gentlemen on tour later this month. You, too, might discover your new favorite band!