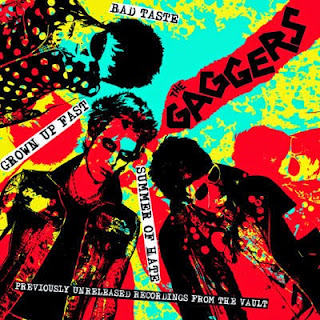 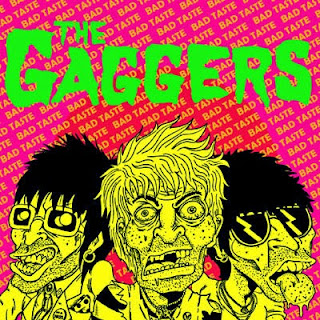 My fourth time posting on The Gaggers will unfortunately be my last. The Gaggers - probably my favorite punk band of the last few years - recently called it quits. But while London's snot-punk kings will be severely missed, not all the news is bad. The silver lining comes in the form of the long-awaited release of the "missing" tracks from the Rip You Apart recording sessions. That's right: we get one last Gaggers 7", and it's a total killer! "Bad Taste", "Summer Of Hate", and "Grown Up Fast" date back to 2008 and feature the band's original three-piece lineup with Busy Signal on drums. These songs were supposed to be on the band's debut LP but were left off in the interest of keeping the album lean and mean. But by no means are they "lesser" tracks compared to the rest of Rip You Apart. I mean, come on. There's no such thing as a second-rate Gaggers song!

Listening to these tunes, I'm quickly reminded of why I went so crazy for The Gaggers in the early days of this blog. These songs are vintage Gaggers - filthy '77 punk with throat-slashing guitars and snotty as hell vocals from the inimitable Terminal Gagger. Think Jabbers, Pagans, and Dead Boys with an English point of view. "Bad Taste" can instantly be added to the list of classic Gaggers tracks. Right off, I'm pumping my fist in the air and shouting along to that scathing chorus. And "Grown Up Fast" proves to be the real gem of the lot - a true punk rock anthem and a fitting way for this great band to bow out.

No Front Teeth Records proudly offers three versions of the "Bad Taste" 7". There's the regular version with the multi-colored sleeve, a limited version with a red-toned sleeve, and a super limited version with comic cover art and Gaggers postcards designed by Jackie Sudden from Jet Comix. Order any or all of these versions while supplies last! What a run this band has had over the last seven years: nine fantastic singles, two superb albums, and a leading role in England's most formidable wave of punk groups in three decades. The release of "Bad Taste" is a wonderful thank-you to fans. And we fans, in turn, thank The Gaggers for all the amazing music!