Baby Shakes are back! 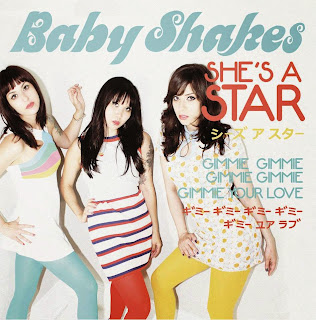 Oh. My. God. A new Baby Shakes single just came out! It's been a long time coming! New York City's queens of power pop/rock n' roll/bubblegum punk, last heard on record six years ago, have made a triumphant return on Surfin' Ki Records out of Italy. The new single is called "She's A Star", and it's a dandy! The A-side is vintage Baby Shakes: upbeat sugary pop chock full of the bubbliest girl group harmonies this side of 1964. If you were worried that Baby Shakes were going to resurface after all these years with a more "serious" approach to music, "She's A Star" will put those fears to rest in a heartbeat. This is the kind of song that puts a smile on your face and makes you want to dance. And, really, nobody does that sort of thing better than Baby Shakes. On the flip, "Gimmie Gimmie Gimmie Gimmie Gimmie Your Love" is a punkier number in a Nikki and The Corvettes/early Donnas vein. Once again: classic Baby Shakes. What a way to come back!

Given that "She's A Star" was nearly sold out before it was even released, I recommend moving extremely fast on this single! There are 150 copies on white vinyl and another 150 on red. And then it's gone. So get shopping! And look for a new album from Baby Shakes coming soon!