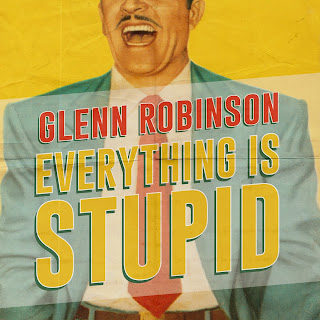 Glenn Robinson is a longtime fixture of the Rhode Island/Massachusetts punk scene who released a terrific solo album called Modern Mistakes in 2013. He's been a standout drummer for numerous bands going back to the late '90s. But he's also a fine singer and songwriter. As a solo artist, he blends elements of power pop and pop-punk into his own power pop punk style. Listen to his song "Wavelengths" and tell me it's not the best Descendents/ALL tune of recent years! Before he started work on a new solo album, Robinson decided to release a few odds and ends that he had recorded last year. And so we have a new EP called Everything Is Stupid - on which Robinson played everything except for a couple guitar solos by Chris Piquette. And I have to say: these are some top-notch tunes! A lot of artists might have just saved these songs for their next album, but clearly Robinson didn't want to wait that long! "Hold My Gold" is full of bright melodies and clean, crunching guitars - like a dream mash-up of Green Day and Kurt Baker. And after the super-fast "Rear Ending A Hearse" pours on the punk rock aggression, we get a true power pop gem in "Waste No Time". I'm always a sucker for a "you and me against the world" type love song, and this track is pretty much the perfect example of that. It's so uplifting and anthemic that you'd expect to hear it playing over the end credits of a feelgood cinematic love story. Then you'd walk out of the theater, and the song would be stuck in your head for the rest of the day! This is what "commercial" pop-punk would sound like if it were actually, you know, good.

I regret missing out on Modern Mistakes when it first came out. You can be sure I won't miss Robinson's next album! In the meantime, Everything Is Stupid is a stupid good value for $3. All downloads come with a super secret bonus cover track!