The Beltones back in print! 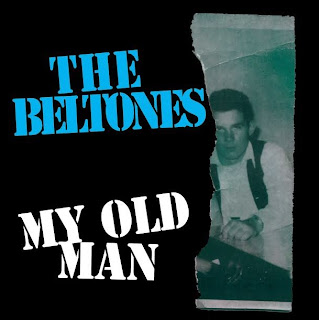 I am delighted to announce that Jason Duncan has revived Just Add Water Records a decade after its last release. It's awesome to see one of my favorite labels of all-time back in action. And I'm particularly pleased with the way Duncan has chosen to re-launch JAW. He has decided to reissue his favorite release: The Beltones' classic 1996 single "My Old Man". That happens to be my favorite JAW release as well!

I could not name many musical acts more worthy of a reissue than The Beltones - one of the best bands to come out of that '77/street punk scene I so avidly touted in the late '90s. While The Beltones (now based in Austin, Texas) are still around and playing shows, they have not released new music in 14 years. I'm so pumped that a whole new generation of fans will have the chance to discover this amazing record. And for those of us who fondly recall owning the 7" back in the day, the good news is that it holds up phenomenally well after 19 years. While the original version backed "My Old Man" with "Fuck You Anyway", the new release adds a third track in "Juvenile Delinquent" (from the 1996 compilation I Can't Believe It's Not Water). All three songs were later re-recorded for the band's 1998 EP On Deaf Ears. And while I love On Deaf Ears, you just can't beat the original versions of these songs. "My Old Man", in my opinion, is the best 7" The Beltones ever made. It demonstrates that this band had way more going for it than the Stiff Little Fingers influence that reviewers constantly brought up. Bill McFadden was (and probably still is) an exceptional songwriter. He never got enough credit for the humanity of his lyrics or the sheer passion in his voice. Who else, in a '90s punk scene dominated by formulaic love songs and political rants, was writing about the repercussions of alcohol abuse and the misfortunes that drive men to drink? And the wisdom that "Juvenile Delinquent" imparts to young people looking to find their way is truly timeless.

If you're a longtime Beltones fan or just someone who'd like to own a fantastic record, head on over to the new Just Add Water store to reserve your copy of "My Old Man". 300 copies are being pressed on black - plus 100 each on red and blue. Hurry: the colored vinyl is already nearly sold out!

now that's what you call a killer reissue