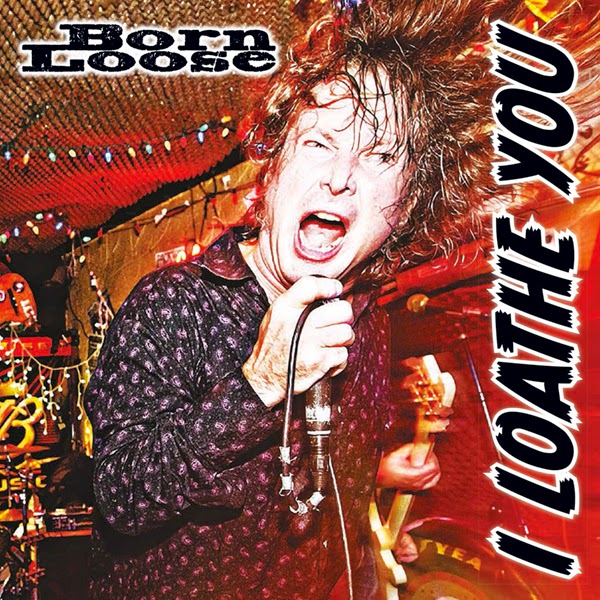 Having recently released the Lovesores' phenomenal 10" Focke-Wulf Vs. Spitfire, Germany's Hound Gawd! Records has returned with yet another essential slab of real deal punk rock n' roll. It's like 1996 never ended! "I Loathe You" is the fourth single from Born Loose - by many accounts the best band going in New York City these days. Seeing a lineup comprised of Larry May (Candy Snatchers/The Crums), Suke (Snuka/Iron Prostate/Candy Snatchers), Shane Konen (Live Ones/Ghetto Ways), and Eric Robel (Heroin Sheiks/Nova Express), you'd assume that Born Loose has to be an incredible band. And you'd be completely correct! "I Loathe You" is an absolute ripper - a veritable hurricane blowing through your speakers. And the B-side, "Today's The Day", could have been a monster single in its own right!

If you long for the days when the likes of The Humpers, New Bomb Turks, and Candy Snatchers tore apart beer-soaked dives from coast to coast, "I Loathe You" will have you rejoicing in a great new era of Stooges/Dead Boys inspired punk rock sleaze. Hound Gawd is quickly establishing itself as a label that gets the best material from the best bands, and that's certainly the case with this fireball of a single. Larry May - in my opinion one of the greatest punk vocalists to ever shout into a mic - has never sounded better. If you're going to sing a song called "I Loathe You", you have to really mean it. And, boy, does he ever! Right off the bat, he lets out a scream that will have you questioning his mental state and/or the immediate safety of anyone in his vicinity. Then he launches into his vocal and proceeds to rip someone a new asshole. Ya gotta love it! Meanwhile, you've got lead guitars going crazy and a rhythm section propelling the action like a reckless driver aiming for a pole at 100 miles per hour. This, my friends, is the gold standard of pissed-off punk rock!

"Today's The Day" dials back the pace a little but hits just as hard - with Larry turning out another raging vocal and Suke employing his guitar like a weapon of mass destruction. I'm pretty sure that that chorus could inspire even the most mellow soul to start breaking shit and knocking heads! The song doesn't even reach two minutes, yet it leaves you out of breath and wondering what in the hell just hit you.

To the point: this is the best punk rock single I've heard in a couple of years. Procure it by any means necessary.