A stunner from Sonic Avenues! 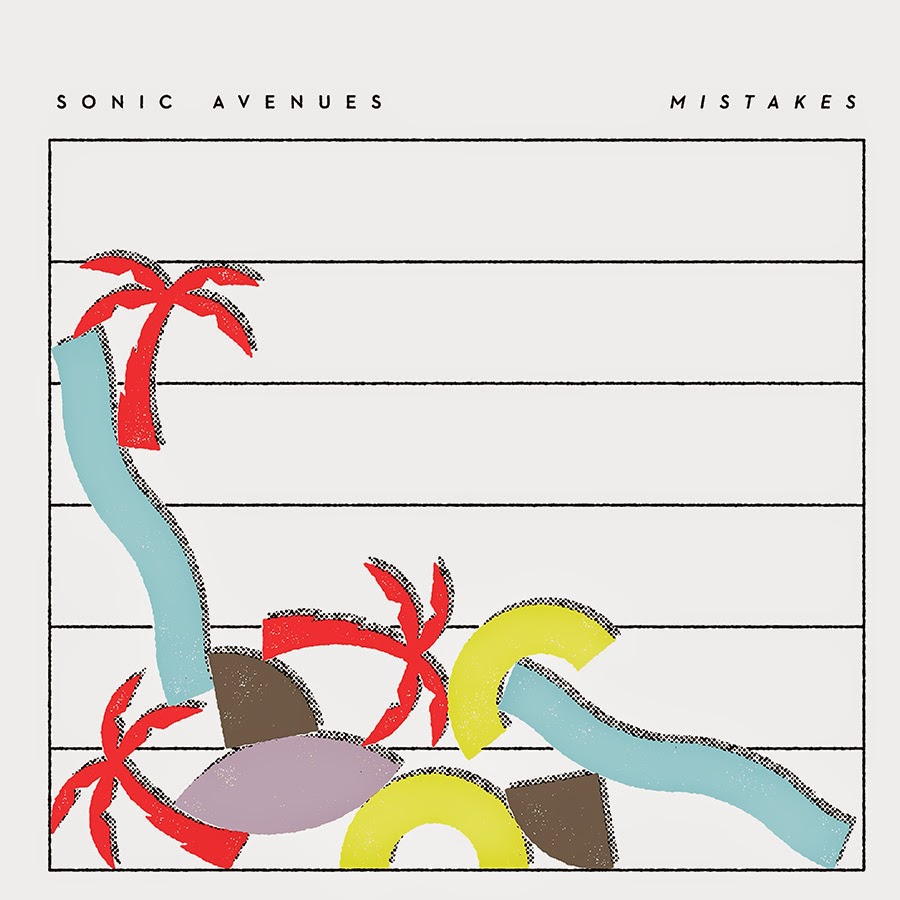 If you're into today's garage/punk/powerpop scene, Sonic Avenues are a band you ought to be well-acquainted with. Their 2012 release Television Youth is a true latter day standard of the style. But on its superb third album, Mistakes, this Montreal foursome has moved well past any genre pigeonholes and fully come into its own. Much like Dirtnap label mates Something Fierce, the Aves can no longer be discussed in terms of what bands they "sound like". This isn't to say that they have moved away from pop or punk. But they've found their own unique voice as a band, and Mistakes is by far their best album yet.

Mistakes is generally more of a pop record than Television Youth was, and perhaps the first thing most people will notice is that the Aves don't play the entire album at lightning speed. There are a couple of tunes that totally race, and there are moments in a few songs where the tempo is pushed to the brink. But for the most part, the band has taken its foot off the pedal and really given its signature hooks room to breathe. The melodies that were so pronounced on previous releases are even stronger now, and the band's songwriting has gotten far more sophisticated and just plain better. I think most great bands eventually reach this point in their history - where they discard any preconceived notions of what their music is "supposed" to sound like and just start making the music that they want to make. By no means is Mistakes going to alienate the band's current fan base. This is a Sonic Avenues album all the way. It builds on the foundation the group had already established and takes a big step forward. You'll hear the band playing fast and slow - sometimes within the same song. Some tracks have a bright, goodtime vibe to them, while others come off vaguely dark or melancholic. And although the songwriting is more refined and complex, from an energy standpoint absolutely nothing has been lost. This is still the perfect band to listen to while you're out having fun with your friends on a summer night. "Automatic" and "Teenage Brain" are as infectious and immediately satisfying as anything this band has ever done, and they'll quickly have you punching up the volume and singing along.

Mistakes is that rare achievement in punk/powerpop music - a break from formula that doesn't sacrifice an ounce of what made the band great in the first place. From the opening notes of the spectacular "Waiting for a Change", the band sounds amazing - exuding tightness, confidence, and a palpable joy for playing music. New bass player Chance Hutchison has elevated an already outstanding rhythm section, and the lead guitar work is well beyond anything you'd expect to hear on a "punk" record. Mistakes was self-produced by the band in singer Max's apartment, yet it sounds like it was made in the best studio money could buy. It's just an incredible record at every level. Songs like "Too Late" and "Wasted Summer" recall the band's prior sound but do so much more with it. And while '60s pop inspirations have been critical for the Aves from the beginning, tracks like "In Your Head" and "Lost and Found" revisit them with a maturity and evolved artistry that will surprise a lot of people. In this realm of music, some bands are best-suited to make the same record over and over. Thankfully, Sonic Avenues are not one of those bands.