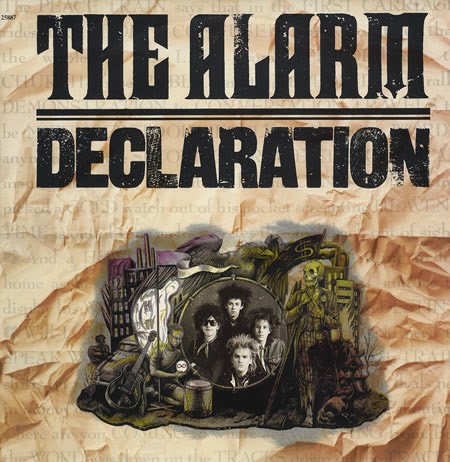 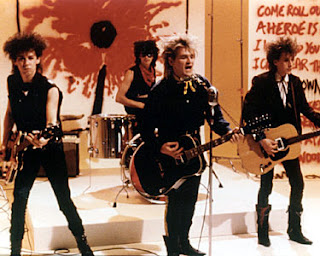 With hair bigger than Bono's ego and an anthemic, socially aware repertoire, The Alarm never really escaped the shadow of Clash and U2 comparisons. But unlike their Irish counterparts who merely thought their music had the power to alter the course of human history, this Welsh foursome was a legit heir to Strummer and company's warrior legacy. Declaration, The Alarm's 1984 full-length debut, was largely comprised of singles recorded throughout the band's infancy, and as such it burns with youthful idealism and a bold purpose bordering on pretension. Every song comes off like an intended anthem – the barnstorming set list closer that incites an enthralled crowd to go home and change the world, to overcome the forces that oppress by any means necessary. Such aspirations would be hard to stomach…if the songs weren't so freaking good! Who can manage to listen to "Sixty Eight Guns" and not want to immediately run out into the street and start kicking the oppressors' asses? Not I! With its rousing chorus and indelible melody, it's not just a call to arms – it's a great, even classic, rock n' roll song.

Previously a punk band out of Rhyl, Wales called Seventeen, The Alarm adopted a new moniker to go with an evolved sound and a more pronounced political angle. But while the Top 20 U.K. hit "Sixty Eight Guns" is an obvious nod to punk's high-powered indignation, much of the album favors an acoustic/folk approach that's more Dylan than Clash, more Woody Guthrie than The Jam. "Blaze of Glory" demonstrates that you don't need high voltage to make a soaring anthem, while "Tell Me" improves immensely upon the early U2 blueprint. And the songs that rock really rock. "Where Were You Hiding When the Storm Broke?" is like "Sixty Eight Guns" V.2; "Marching On" is pure jangly adrenaline. These anthems, while vague about specific social ills, call for a collective fight against all that ails the world. Lyrics about fighting the good fight and standing up against the powers-that-be abound - and with music this convincing, who could possibly resist joining The Alarm's army? Sign me up now! I'll grab my hairspray, cowboy boots, and weapon stockpile and meet you at the town square. Who are we fighting? Does it really matter?!

I've never been able to forgive U2 for its grandiose self-righteousness, yet the very same qualities about The Alarm have always struck me as endearing. Maybe that's because U2 never delivered a song as genuinely rousing and triumphant as "Sixty Eight Guns". Or maybe it's because The Alarm came off more like soldiers on the street than bloated messiah figures casting judgment from pearly thrones. The best "socially conscious" rock bands are the ones who'd be equally awesome if they were singing about girls or Twinkies instead – the ones who understand that great tunes will outlive even the most pressing social issues. Declaration, for all its naiveté and intended grandiosity, could be thoroughly enjoyed even by someone who didn't understand a word of English. While far from flawless, it's a terrific, exciting rock album that sounds surprisingly undated today. How often can you say that about an album issued on a major affiliated label in the early/mid '80s?

In the 30 years since the release of Declaration, The Alarm has continued to tour and make amazing records that have been largely ignored by the media and the music industry. If you get the chance to catch the band in concert, don't pass it up. And any and all recordings by The Alarm are worth buying. Declaration, of course, is the perfect place to start.

i saw them at lancaster uni when this album came out. top album and great live. not as good as the clash but better by far than u2

Dead on, Josh, couldn't agree more. I saw them in Boston a couple of years after this album, with a bunch of friends, including one young woman who swore she'd slept with the lead guitar player a few months previous, while she was on vacation in England. She promised she could get us all into the band's suite at whatever hotel they were staying in after the show, but after an hour or so of drunken loitering, we all gave up and went home. Still, a good show.

There is a great documentary on YouTube about Mike Peters fight with Leukemia and his inspiration from the line “Stay Alive” in the song “In a Big Country.” Great review of a great band, by the way!

Wow. Just heard the album for the first time in 3 decades....having just bought a vinyl record player. Moved me to tears! Far superior as an album to anything U2 ever did. Up there with the Clash. Great review.