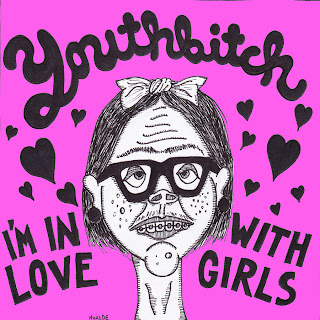 One of last year's nicest surprises was Youthbitch's extraordinary sophomore LP. It made me an instant fan and ultimately cracked my year-end top ten. Given the band's punky powerpop style and Portland home base, I think a lot of people must have been wondering, "How in the hell is this band not on Dirtnap Records?!" Well, guess what? Now Youthbitch is on Dirtnap! A co-release with Jonnycat Records, new 7" "I'm In Love With Girls" is a textbook specimen of the Dirtnap brand. The moderately paced title cut is pleasingly reminiscent of the Exploding Hearts yet still displays the qualities that make this band unique. These Midwestern transplants bring a puerile silliness to their craft that I hope they never outgrow. And even though they're very talented, they still approach their music as if they just learned to play last week. You see a title like "I'm In Love With Girls" and expect a certain kind of song. And that's exactly what you'll get! The lead guitar parts are so catchy - I guarantee that they'll be stuck in your head for days! I just caught myself whistling the melody while standing over a urinal. I think the band would be proud.

While Youthbitch still refuse to take themselves seriously, this record does show some real growth in the songwriting department. There are no "joke" songs this time, and two of the three tracks run longer than three minutes. These lads may come off like a bunch of degenerate goofs, but their pop sensibility is surprisingly refined. Closing track "Everyone's Mellow But Me" is indicative of how far they've come. It's an ironic title since the song is kind of, uh, mellow. Again, the guitar hooks are pretty damn stupendous. Think Buzzcocks meet Mean Jeans, or something like that.

I was expecting big things from this single in the wake of the awesomeness that was Don't Fuck This Up. And Youthbitch was not about to let me down. These guys have entered my top ten list of current bands - and they're rising fast!