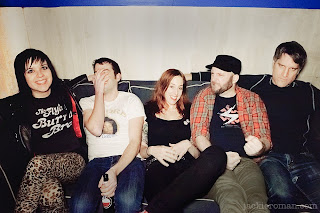 To recap: Livids are Eric Davidson (New Bomb Turks) on vocals, Jami Wolf (Shop Fronts, Zodiac Killers) on guitar, Daniel Kelley (Dead Ringers, Complaints, Paper Bags, and Re-volts) on guitar, Greg Collins (Radio 4) on drums, and Joi Lacour on bass. Whether you consider them a supergroup or just a super group, they're pretty much the hottest thing going. In just the past few weeks, they've unleashed four seven-inch records upon the unsuspecting populace. The latest is out on Slovenly Recordings, and if you don't like it you might as well just give up on punk rock forever. Title cut "Your House or the Courthouse" is a scorching blast of punk rock n' roll adrenaline that has me feeling like it's 1993 (or 1977!) all over again. If you were hoping for something almost as good as the New Bomb Turks, I'd say Livids have already exceeded your expectations by a long shot. This is not some worn-out oldtimer halfheartedly reviving bygone glories. It's one of the great punk howlers ever bringing it with a ferocity that ought to be the envy of any young up-and-comer - backed by a band as fierce and formidable as he's ever had the privilege to work with. The hyper-speed blitz of "Zilch" approaches a hardcore velocity but never relinquishes its rockin' swagger. And "New Race" is an Iggy Pop cover powered out like The Stooges might have done it. This being just one of several brand new offerings from Livids, I encourage you to head over to their Bandcamp page and stream all that glorious noise for free. And then get after that vinyl - this shit's going fast!