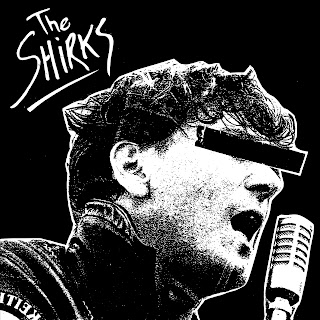 Score another one for Greg Mongroll! He recently turned me on to Thee Mighty Fevers, and now he's got me hooked on the new 12" from Washington, D.C.' s The Shirks. It's actually their fifth release, and I've got to say I feel like a real dolt for being unaware of this band's existence until a couple weeks ago. And to make matters worse, I didn't know that the group's singer/guitarist is Alec Budd of the legendary Problematics! Double demerit! Have I been living in a cave or something? Well, yeah, kinda.

The Shirks' label (the esteemed Grave Mistake Records) offers up the description of "trashy, fuzzed out punk rock n' roll". Oh man. Doesn't that just sound like something I'd be into?! "Trashy" rock n' roll is like "malty" beer and "curvy" women: pretty much guaranteed to be great. And, indeed, the record straight-up smokes! If you combined the early Saints with the top bands from the heyday of Rip Off Records and pushed the tempos to the brink of hardcore, it would sound something like this. Songs like "Bad Area", "I Don't Want To Work It" and "9:30 Dicks" gloriously blur the lines between raw, primitive garage-punk and '77 punk rock n' roll. And 99 percent of the "lo-fi" bands out there would kill for that filthy guitar tone! You get eight songs spinning at 45 RPM, and they're all rippers! Definitely a must-hear. The check's in the mail, Greg!

come on, lord rutledge, no mention of the problematics 'blown out' 10" in this review?

How did I not know Al Budd was in this band? You win! I smell a review edit....