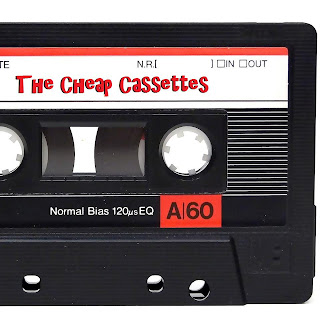 It's been close to two years since we last heard from The Cheap Cassettes. You may remember Chaz and Kevin from the late, great Dimestore Haloes - and the two continue to collaborate in spite of the 5,000 or so miles separating Chicago and Hawaii. This sort of long-distance musical relationship is not easy to maintain. Band feuds have to be conducted via Skype. Hotel rooms have to be trashed individually. Both men fly futuristic space craft to a secret practice pad in the sky (and somehow, upon his disembarking at the space port, Chaz's hair always remains perfect). It's been a slow go as The Cheap Cassettes build their album one track at a time, but now they're up to five songs. That's half way to a full LP - with two more songs coming soon! And when you're forced to take your time like this, you can pretty much guarantee that only the A-grade material is going to make the cut. The brand new track "Wreckless" is no exception. If you assumed an immediate Naked Raygun influence given Chaz's recent relocation to Chicago, Material Issue would be a far better guess.

"Wreckless" is up there with the best handful of songs Chaz Matthews has ever written. And that's saying something! In the words of the artist, it's more of the "tear jerkin' power pop/rock'n'roll goodness" we've come to expect from this cat. With a pre-chorus evoking The Replacements ("Parents and friends they died on us/We kept going somehow") and a chorus that brings to mind Candy ("Here we are, all the wreckless/Ain't nobody gonna break us"), the whole thing comes off like later Dimestore Haloes spending the night with Big Star and The Scruffs. Stylistically, it's perfectly executed hard pop. But at its essence, this is really soul music. In that respect, I'd put Chaz in the same category of songwriters as Greg Cartwright, "King" Louie Bankston, and "Gentleman" Jesse Smith. And you certainly can't overlook the contributions of Kevin Mess, who's a one-man rhythm section and a true connoisseur of obscure power pop. Obviously I've been a huge Chaz fan for 16 years plus, but there's something about him and Kevin together that really clicks (a la Paul Westerberg/Tommy Stinson). Circumstances might prevent them from being prolific right now, but everything they've churned out has been total gold. And I will always take quality over quantity. Plus there's something really cool about the new material being released one song at a time. It really makes you appreciate each track as a singular piece of work. Check out the whole album if you haven't yet. It's pretty fantastic. And if you're already a fan, it goes without saying that "Wreckless" is a must-hear. The Cheap Cassettes look to have album of the year 2016 in the bag!