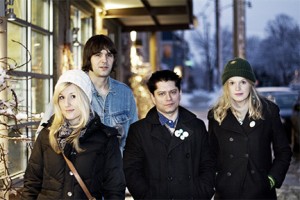 As I recently revealed, Milwaukee's Sugar Stems are my #2 favorite current band. So you can imagine that I was pretty excited about their new album finally getting an American release! It was a festive day indeed. I put on a tie and procured an extra bottle of iced tea. I invited over several friends and even a couple strangers. I may or may not have required the afternoon off. Issued at the end of December by Screaming Apple Records (Germany) and Dream On Records (Japan), Can't Wait came out last week on Dirtnap. And for the first time in my reviewing life, it's okay for me to lift copy off the press release. Yeah: I wrote that nonsense!

If you looked up "pop" in the dictionary, I'm pretty sure you'd be referred directly to the Sugar Stems. Formed in 2007, this band has been delighting power pop fans for several years with its shamelessly sweet melodies and upbeat, impossibly catchy songs. With ties to both classic power pop and the phenomenal early 2000s Wisconsin punk scene, the Sugar Stems bring plenty of power to go with their dizzying sugar rush of pop. Those of us who'd been long awaiting an heir apparent to The Shivvers and Nikki and the Corvettes literally jumped for joy when we heard the band's 2010 debut album Sweet Songs, spending the subsequent months dancing in the streets and angrily rebuking local radio stations for failing to play "I Gotta Know". Last year a pair of superb new singles on Certified PR Records had me waiting with bated breath for another LP. Appropriately titled Can't Wait, said album is by no means a rehash of the wonderful Sweet Songs. It's more "grown-up", but only in an entirely good way.

Without abandoning their signature honeyed melodies and high-spirited candy pop style, Betsy and the gang have made a more mature and consistent album that's definitely their best release to date. The production has been stepped up another notch, and every song sounds like a hit. If you missed the singles "Greatest Pretender" and "Like I Do", they're here in all their infectious glory. And the ebullient title track is 100 percent classic Sugar Stems. But it's the more serious/melancholy songs that really showcase Betsy Heibler's development into one of the finest songwriters working today. In particular, songs like "Landline Static" and the stunning "Love You To Pieces" are steeped in the timeless traditions of Brill Building and '60s girl group pop, yet feel genuinely fresh in the year 2013. They both offer absolutely gorgeous melodies, and they plumb lyrical and emotional depths that were merely hinted at on Sweet Songs. After years of penning simple but perfect pop songs, Betsy has written her masterpiece in "Love You To Pieces". And while there are songs on this album capable of moving you to tears or at least serious personal reflection, the record is anything but a downer. There's something about the Sugar Stems' music that just makes you feel good. Sweet Songs was pretty much a modern classic of power pop, and Can't Wait is an even better album. Give it a listen for free, and surely you'll want to buy it like I did!