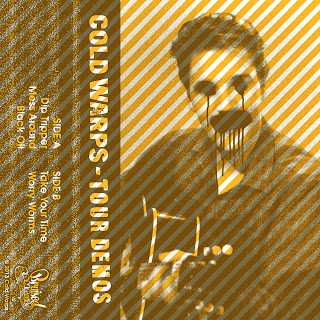 There are probably only a handful of legitimate contenders for the prestigious title of Best Band in the World. And I'm pretty sure that Cold Warps have got to be one of them. The Halifax/Ottawa foursome seems to raise the bar with every new release. The band's latest tape is its best yet - consisting of five demos for an upcoming LP. It's pretty much the same old Cold Warps, but different. Does that make any sense? While still very much in the lo-fi pop style, the group's sound has been beefed up quite a bit. It's a little louder, a little punkier. If I had had a tiny criticism of the previous recordings, it might have been that the songs could have used just a little more punch. Well, I certainly can't say that anymore! Surely the final versions of these songs will be very different. But knowing these guys, they'll somehow find a way to make them even better!

Recorded "in a parking garage and bedrooms", Tour Demos demonstrates that you don't need big budgets or state of the art studios to make well-crafted pop music with great-sounding harmonies. Cold Warps are just one of those bands that seem perfectly suited to a lo-fi recording approach. When you can write songs this good, you don't need all the bells and whistles. Of course I love the bouncy jolt of high-energy numbers like "Take Your Time" and "Mess Around". Fans of the band's distinct AM radio power pop meets surf rock meets garage-punk sound will absolutely love these tracks. What a rush! But there are some nice surprises as well. Opener "Dip Tripper" puts the power in power pop, and the acoustic track "Worry Worms" is totally weird yet completely brilliant. These guys can truly do it all: love songs, creepy songs, creepy love songs...

Seriously, man: if these are just the "demos", how great is the album going to be?!