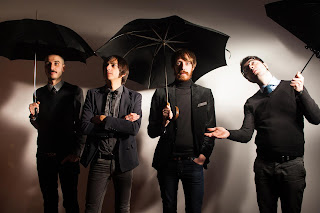 I've been waiting a long time for the chance to write about Radio Days. By the time I started this blog, the band's most recent album was already a year old. So I figured I'd just wait for them to put out another album. And yay, here it is! Issued last month, Get Some Action is the Milan power pop foursome's third full-length release. And as expected, I absolutely love the thing! I cannot stop listening to it!

What I love about Radio Days is the perfect simplicity of their craft. Purely and completely, this is a pop band. They're not trying to be revolutionary or modern or even particularly original. I wouldn't call them "retro" as much as I'd call them throwbacks to a time when perfect pop songs ruled the airwaves (hence the name of the band!). Remarkably, Radio Days pull off this sort of guitar pop classicism without sounding like clones of the artists they revere (Rubinoos, Big Star, Elvis Costello). Perhaps it's just the Italian accent, but I don't get a "Yeah, I've heard this so many times before!" feeling from Get Some Action. Or maybe it all feels so fresh because these guys are just so very good at what they do. Dario and company just have a knack (or should I say Knack?) for crafting simple melodies that take me straight to my happy place. And even as their artistry has matured, they have not lost sight of essential basics like melody and harmonies.

Get Some Action sets a tone off the bat with the impossibly upbeat "Burning Together". This would be a great song to kick off a live show, and it's a great song to kick off an album as well. Right off, you know you're in for a good time full of infectious melodies. Songs like "Girl Girl Girl" and "I'll Be Your Man" are flawless nods to the British Invasion, and the title track is catchier than the clap on a college campus. But what makes this album truly great is the balance between the sunny feelgood numbers and the slower, prettier songs. The tremendous talent of this band really comes shining through in pristine gems like "One Thousand Miles Away" and "Goodbye My Lover". They're just so beautiful and well-crafted, yet no less "hummable" than the lighter cuts. And while it's often a throwaway when a band breaks out the acoustic guitar, superb album closer "My Dreams On the Ground" is one of the record's high points - replete with a string arrangement that genuinely fits the song.

Is it too early to start talking about album of the year frontrunners? Get Some Action is going to be hard to top in 2013. It's chock full of indelible melodies, and it brightens my day no matter what kind of mood I'm in. While hardly the first (and definitely not the last!) band to draw inspiration from the '64-'65 Beatles, Radio Days demonstrate how timeless this kind of music can be when it's carried off with such skill and enthusiasm. Most critically, this LP is not a mere "genre exercise" like a lot of power pop records tend to be. As they say, great songwriting never goes out of style.

Hey Josh, thanks for the heads up. Sounds like it's way up my alley. Ordered the vinyl (in pink) and got the dl already. Plan on listening to it on the commute home tomorrow morning. Should keep me from falling asleep and driving off the road.

BTW., looks like these guys are playing Pittsburgh this Saturday night.