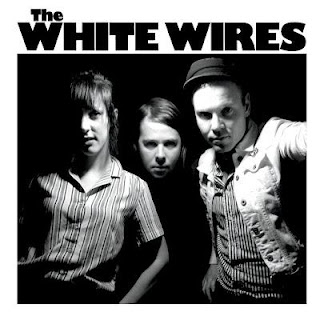 The White Wires are my kind of band. If you know me, and you know The White Wires, surely you knew it was only a matter of time before these Canadian sensations got reviewed on F & L. And just in case I wasn't already sufficiently impressed with their quite good first two LPs, they decided to go out and make their "pop" album. Say what?! A pop band aspiring to go even poppier? You had to know I was gonna be all over that!

Sure enough, WWIII is as advertised. While The White Wires came on as a formidable but typical punk/powerpop/garage hybrid, they have since hopped a train to Popsville and really separated themselves from the pack. They've kept the recording basic and rough around the edges, but all in all the tempos are dialed back and melodies loom larger. The focus seems to be more on writing great songs than it is on fashioning any particular "sound". On their bandcamp page, The White Wires say, "We wanted to make a record that had some dynamics, with lots of ups and downs. At the same time, we wanted to still have a lot of variety on the album from one song to the next." WWIII thus has the feel of a "classic" pop record like you might have heard back in the late '70s. No doubt, the raw production and the economy of the songwriting (nearly every track runs right around two minutes) keep the band connected to its garage/punk roots. And the influence of bands like The Undertones is more than a little obvious (just listen to "Jackie & Donna"!). But I'd still recommend this record even to people who aren't into punk music. Anyone who's a fan of loud, hooky guitar pop will love what these three are doing. And the key is that they've written some great material for this album. I don't even want to mention a particular standout track. For my money, just about every song on the record could be considered "the hit".

What I appreciate most about WWIIII is that its approach is so simple. I don't think there's anything harder to do in music than successfully write simple pop songs. The melodies on this record are just so catchy, and who can't relate to lyrics about love, life, and being in a band? The White Wires' fondness for the roots power pop of Rubinoos, Poppees, etc. is more palpable than ever. But I also hear strains of contemporary greats like M.O.T.O. and some nods to the classics (The Who-like power chords in "It's Been A While", the Motown-ish bass intro to "And Then You Told Me"). Basically, WWIIII is a timeless pop/rock n' roll record. And it just might be my favorite LP of the year. Highest recommendation!

I agree with you. Another great album by this band.