It came from Ohio... 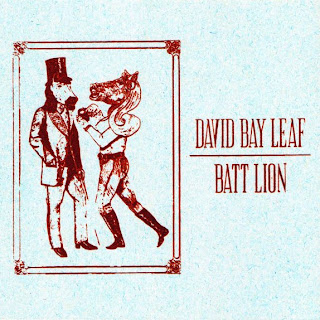 Northeastern Ohio, with its fantastically flat highways and long lineage of great Americans (Clark Gable, Ed O'Neill, Thurman Munson), holds a special place in my heart. Where else in the world can you buy Bertman Ballpark Mustard at a turnpike stop? And while the region is frequently noted for its significance in the ancient history of punk/indie/alternative/whatever-you-call-it music, two of its own are among the best new bands going now. They've teamed up on a split EP - the first vinyl release from Lion's Care Recordings. This is not the first time I've commended the efforts of the some of the principal players involved. David Bay Leaf singer/bassist Robert Glen Ledyard III was in Radar Secret Service, a band I raved about a decade ago (God, time flies!). And Batt Lion singer/guitarist Kenny Halbert (Cheatin' Hussies, Kill The Hippies, Cock Spaniels, Menudo, Village People) has been a longtime favorite of mine. But like Mark McGwire, I'm not here to talk about the past. We are moving boldly forward. Northern Ohioans do not rest on their laurels. They are innovators. They are visionaries. They defend the Lake from northern invaders. And while I'm going a little outside my normal range of musical expertise, I have to say that David Bay Leaf and Batt Lion are two of the most impressive underground bands I've heard in a long time.

Out of Akron/Kent, David Bay Leaf  are somewhat of an area super group. Gabe Schray from Houseguest is on baritone guitar, and Scott Davidson from Sexual Tension is on drums. They join the exceptionally talented Ledyard to form a different kind of power trio. Think vaguely gothy post-punk meets the good kind of indie rock. The hauntingly pretty "Open To Experience" is poppy in a pleasingly oddball way, while "Boring Grotto" is an eerie slow burn of tribal beats and entrancing bass lines. Schray's guitar work is incredibly beautiful, and it works in perfect harmony with Ledyard's robot man vocals and the generally dark atmosphere of the music. And although there's a lot going on instrumentally, there's a classic simplicity to the hooks. These songs invade your brain and stick around all day. Memorable lyrics like "I'd be open to experience/If I was ever in the mood/But I'm rarely ever in that kind of mood" and "You can assume somewhere/Someone's up to no good" add an extra dimension of awesome. You've won me over, fellas. I'm ready to hear more!

Youngstown's Batt Lion are like no band I've heard before. Lots of groups talk of mixing multiple genres into a unprecedented aural hodgepodge, but these guys actually went and did it. If grunge meets psychedelic garage meets noise-core meets '70s metal meets surf meets folkie soft rock meets back-in-the-day Ohio punk sounds like something you've heard before, you're probably lying! "Part Earth" opens with jangly guitars and treads softly until Kenny's vocals usher in a tidal wave of weird. It whets the appetite. The main course is "Witch's Wheel", which comes on with some sludgy Stooges via Sabbath guitar heaviness, opening slow but quickly kicking into another gear or two with lots of power riffing and epic wanking. You can definitely tell that these guys are inspired by the thundering guitar rock of yesteryear, but that's merely a starting point. This ain't your dad's stoner rock. Or your brother's. More like an alien's. And you know the aliens have better drugs and exponentially superior technology.

In the wake of my recent statements about why splits frequently disappoint, I've got to say this one is top-notch. Go ahead and shell out those five bucks. Do it for Ohio. Ohio would do it for you.