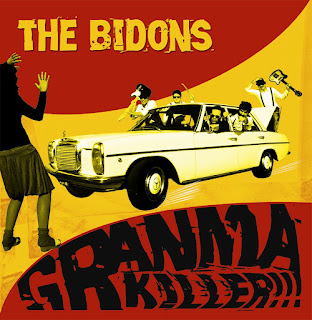 The Bidons are from southern Italy and formed in 2005, but I would not be surprised to learn that they're actually time travelers from five decades back. Someone inspect the tags on their suits! On their debut album Granma Killer!!!, they kick up a hip-shaking neanderthal racket in the vein of '60s garage rock/teen beat, and a sweaty good time surely awaits all who partake! Clearly they've studied the classics - Count Five, Seeds, Shadows of Knight, Sonics - and have emulated those '60s punk sounds with an energy and attitude that also bring to mind The Hives in their earlier days. There's no misunderstanding what The Bidons are all about. They're garage rockers through and through. They're not trying to make some kind of bold artistic statement or impress you with musical complexity. They just want to have fun and get you up and moving your feet. They've come for a rock n' roll dance party, blasting up-tempo jams with silly/fun lyrics and a beat that never quits. And while the style is nothing new, these fellas pull if off with pizazz. At just eight tracks, Granma Killer!!! isn't going to overstay its welcome. It's all over in a few ticks under 17 minutes. That's probably a good thing, because otherwise you might collapse from too much dancing!

As bands of their type tend to do, The Bidons have supplemented their original material with primo cover selections from the garage heyday. They have a go at The Strangeloves' 1965 top 40 hit "Night Time", and even better is a ripping rendition of the period classic "Be A Caveman" (the second single by Bakersfield, California's legendary Avengers). But it's a credit to the band that their own songs don't fare badly in comparison. "No!" is a garage rock anthem in its own right - and seems especially pertinent in this time of anti-corporate fervor. And "Granmakiller" bridges the gap between retro garage rock and modern garage punk. It reminds me quite a bit of The Kidnappers - one of my favorite bands of recent years. Thankfully, it does not seem that any granmas were killed during the making of this song.

The Bidons put the rock in garage rock. Check 'em out!

Thanks from the time traveller band... The Bidons