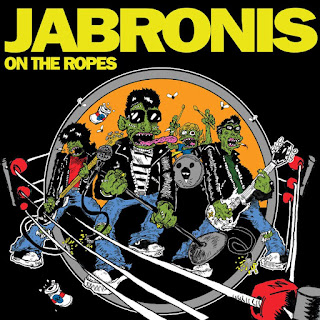 There seems to be some difference of opinion amongst the punk rock faithful when it comes to Ramones-core as a genre of music. Some people love it. Others think it has no need to exist. I've heard a number of people say things along the lines of "Dude, if I'm gonna listen to The Ramones, I want the real thing!" But while I understand where the naysayers are coming from, I personally don't find Ramones-core to be pointless. I kinda dig it, in fact. I mean, come on. How about Head, The Hanson Brothers, and The Riverdales? Aren't they all terrific bands in their own right? Haven't they all made records that were as good as or better than a lot of later Ramones albums? Wouldn't you be losing out if you refused to listen to those bands simply because of the imitative nature of their music? My stance, then, is that Ramones-core rules when it's done well. Which brings us to the Jabronis from Portland, Oregon. Their debut album On The Ropes is as fine of an example of Ramones-core as you could hope to find. It's a fun record. It rocks the roof off. What more do you need?

The #1 rule of Ramones-core is that you have to go all-in. You must live to blatantly rip off the first two Ramones albums (or the first three if you're "progressive"). For sure there are lesser degrees of Ramones worship out there, but it's not really Ramones-core unless you're full-on committed. These Jabronis fit the bill right down to their wardrobe, cover art, and kayfabe familial ties. They blast out pummeling three chord ditties with no excess wanking and lyrics that appeal to the pinhead and cretin in all of us. If these four "brothers" sound suspiciously like Portland's wonderful Anxieties, that can hardly be considered a bad thing. The band is a powerhouse, and the record flat-out rips. If you're gonna ape the mighty Ramones, this is how it should be done! Nine of 14 tracks don't make it past the two minute mark, and the "epic" of the album is the three minute, three second "Hanging Out At The Berlin Wall". I love it that a couple of songs ("Jabroni Juice", "Total Jabroni") reference the band name. And for sure, a song like "Girl's Name (Is A Noun)" is worth its weight in gold Chuck Taylors. You could argue that a group like this is one step removed from a cover band. But isn't that the whole point?