Kurt Baker wants you around! 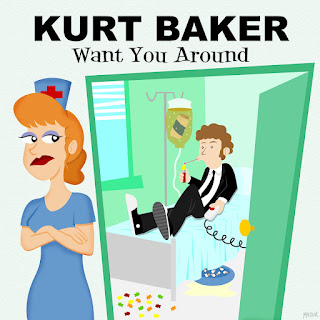 Admit it: you've all been thinking it. I'm supposed to be this big power pop nut. I've got a closet full of skinny ties, and I listen to the first Romantics album every other Thursday. I have a secret tattoo of the Bomp! logo. So when in the hell am I finally going to get around to reviewing Kurt Baker?! I've been doing this blog how long? Well, okay. Today is the day!

In my book, Kurt Baker is one of the modern day greats of power pop. His modernized take on the timeless melodies of '60s pop is not to be missed. And he's turned out an EP that is running neck-and-neck with the new Missing Monuments record for the title of F & L single of the year (watch the news tomorrow for the latest update). There's lots to like about Kurt Baker - his voice, his songwriting chops, his awesome backing band, his cool hair. But what I might like best about him is that he takes me back to a time when "commercial" wasn't a dirty word and pop hooks ruled top 40 radio. I first fell in love with popular music circa 1980-81 when I was nine and ten years old. Those were the days, man. Other kids my age were playing with toys. I was busy plugging quarters into pizza shop jukeboxes and reading Billboard magazine. Kurt's younger than I am, but he seems to recall that era like he lived it. Heck, on this record alone he's managed to cover songs from two of my three favorite albums of all time! And Rev. Norb's narration recalls a time when the radio D.J. was king.

The title cut "Want You Around" is the only original on the record, but it's total gold. Think The Knack meets Rick Springfield with a modern pop-punk sheen. I cannot get enough! In some alternate universe where 1980 never ended, this upbeat number has gone top ten in a dozen countries and spawned a new dance craze! It was actually written a number of years ago for Kurt's old band The Leftovers. It gets new life in 2012 with some help from Dan Vapid on backing vocals. If this were a one-song single, you'd still have your money's worth. But wait! There's more!

All three covers are from that '80-'81 era of hit radio I hold so dear. "News At Ten", the best track off of The Vapors' New Clear Days, gets the Kurt Baker treatment good and proper. It's a really good version - true to the original but not a carbon copy. Vocally I'm reminded of the old Philly power pop band The A's. Kurt also has at "Sleeping With The Television On" off of Billy Joel's Glass Houses. That happens to be my second-favorite album ever next to The Clash's London Calling (New Clear Days is third!). It was Billy Joel's (very successful) attempt to cash in on the new wave pop craze, and kudos to Kurt for recognizing a somewhat forgotten power pop-ish gem in "Sleeping With The Television On". Again, he plays it straight and does a great rendition. The third and final cover is Thin Lizzy's "Hollywood (Down On Your Luck)", off of their 1981 LP Renegade. What a splendid choice! It's one of my favorite Lizzy songs, and an unheralded minor hit from late '81/early '82. Who doesn't love a rock epic? Kurt's version, I'm happy to report, is as hard-rocking and hook-laden as the original. If that chorus doesn't give you tingles, I have to wonder about you. Thin Lizzy, like the Dictators, are one of those bands that separate the men from the boys when it comes to good taste in music. If you like Thin Lizzy, you know good music. And Kurt Baker loves Thin Lizzy.

Alright! As much as I enjoy hearing Kurt Baker pay tribute to great songs written by other artists, I must admit I'm looking forward to hearing more of his material. We've heard him tackle the pop hits of yesteryear, but surely he's been busy writing the pop hits of tomorrow. Luckily, I will not have long to wait. A new album is due out at the end of the month, and it's going to feature ten original tunes. I can't wait! I heard the first single, and I just about flipped my lid. The record's gonna be something else! Check out Jolly Ronnie Records for the skinny on Brand New Beat. And pick up Want You Around, damn it!

Posted by Lord Rutledge at 7:23 AM