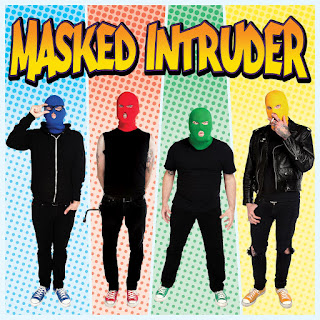 Oh, what a year it's been for pop-punk! First you had Mean Jeans delivering the best pop-punk album in years, and now we have the instant classic debut album from Masked Intruder. First of all, I love their gimmick - these masked miscreants claim extensive criminal histories mostly related to stalking the women they love. In the grand tradition of The Ramones, their brand of humor is kinda sick but totally hilarious. Yes, of course they're joking. Surely some p.c. types will be outraged. But at the end of the day, all this band is doing is taking pop-punk's most enduring theme - unrequited love - to the next level. '90s pop-punk, the band's obvious frame of reference, was largely made by and for guys who didn't get the girl. Countless anthems of the genre centered around the tribulations of young men who hopelessly adored gals who did not return their affections. Masked Intruder is essentially that same guy, tragically smitten with some lovely thing who wants nothing to do with him. And it's tearing him up. Except he's gone to the lengths of following her home, and he may or may not be wielding a knife. Trust me, it's not as creepy as it sounds. Or maybe it totally is. I don't know for sure. That's why this band's shtick is so brilliant.

Here's the thing - the concept of Masked Intruder only works if the music is great. And it is. The whole album takes me back to a time when the Parasites were my favorite band in the world and Screeching Weasel ruled my turntable. At the time I regularly listened to dozens upon dozens of bands who, like me, sported leather jackets and had terrible luck with the ladies. It would be an understatement to say I related. Looking back, I have to ask myself: Was I obsessed with love because I liked pop-punk, or did I like pop-punk because I was obsessed with love? I don't know. God, those were miserable years. But today, in happy times, I still love the music. Masked Intruder are throwbacks to those glory days of pop-punk, gleefully pumping out simple three-chord pop songs packed with sugary melodies, catchy guitar leads, and gooey, doo-wop inspired harmonies. No, it's not rocket science. But these guys pull off this style so well. Creepiness notwithstanding, lead singer "Blue" is an endearing vocalist that you can't help rooting for. You hope, when he gets out of his prison, that he'll finally find true love. And unlike the typical pop-punk group that just works the formula, this band really aspires to write great pop songs. That's where they really get me. Never in my life have I heard a pop-punk band and said, "If only they were more 'punk'!" But I've heard plenty of bands that just weren't, uh, "poppy" enough for my tastes. Masked Intruder do not fall short in that department. They embrace everything you ever loved (or perhaps hated!) about pop-punk, and they do so shamelessly. They are fully committed. Or maybe they should be committed.

Ultimately, I don't think this album is going to turn anyone to the dark side. If you hate pop-punk, you'll likely hate this record. But if you love pop-punk, you're probably already reserving a prime spot in your all-time top ten. Perhaps you've even looked up and down your body, wondering where your Masked Intruder tattoo should go. "How Do I Get To You" is destined for legendary status within the annals of the genre, and really the whole record is brilliant. And while the creepy stalker songs ("Hello Beautiful", "Why Don't You Love Me In Real Life?", "Heart Shaped Guitar") are a hoot, some of the best tracks are really sweet ("25 To Life") or just plain sad ("Breakin'"). I always had a soft spot for bands like this, no matter how much grief they got from my fellow punk rock reviewers. But Masked Intruder have taken this style to a whole new level. The desperation is greater. The songs are catchier. Gimmick or no gimmick, they've made one of the best pop-punk albums ever. Yeah, I said it. Captain Hyperbole is back. Did you miss me?