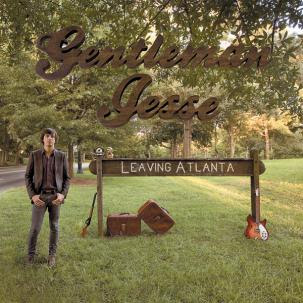 What?! It’s been three months since I updated my 2012 Album of the Year shortlist? I must be losing my touch! Today I make my first public revision to the list, and in all seriousness it might be the last time I mess with the top spot. That’s how good Gentleman Jesse’s new album is. Unless you’ve been living in a cave (which I sort of do), you know the back story. America’s most beloved power pop classicist, after enduring such hardships as a brutal mugging, the death of several friends, and the general air of violence in recession-era Atlanta, went to a dark place for quite a while. He retreated to his basement, wrote a bunch of songs, and eventually emerged with the album Leaving Atlanta. Fear not: it’s by no means a “dark” album. Jesse has not really strayed from the tried-and-true Rickenbacker guitar pop formula that’s been his stock-in-trade for years. And while the labeling of this as a solo album might lead some to believe that Jesse has gone all softy singer/songwriter on us, the truth is that Leaving Atlanta out-rocks the last album by a wide margin.

The good news is that Jesse isn’t really leaving Atlanta. Oh, he may have considered it. But nothing can keep a good man down. Brilliant leadoff track “Eat Me Alive” purges the demons that inspired this album, turning tragedy to triumph. “This city’s trying to eat me alive,” sings Jesse. “But it’s as good a place as any to try to survive. So if you keep your head down, you push on through, you just might make it to the other side.” Words to live by for sure! You hear that frantic guitar jangle, that fierce desperation in the vocals, and you realize this could have been a dark album. But our man did make it to the other side, and this inspiring tune sets a tone for a genuinely upbeat, totally poptastic album. Like last year’s great Missing Monuments LP (King Louie in fact guests on harmonica on “Eat Me Alive”), Leaving Atlanta marries the sounds of classic power pop to the punchy grit of bar band rock n’ roll. “I’m Only Lonely” comes off like The Beat jamming with The E Street Band circa 1980, while “Take It Easy On Me” and “Covered Up My Tracks” blend soulful rock n’ roll with ‘60s girl group dramatics a la The Reigning Sound. And as much as I like by-the-book perfect power pop numbers such as “I’m a Mess” (in my opinion, the best song on the album), what really elevates Leaving Atlanta is that it never quite settles down. Nervy pub-rock corkers like “You Give Me Shivers” provide kicks in the pants at just the right spots, and it’s just freakin’ cool that Jesse gets possessed by Little Richard for a minute-and-a-half of unadulterated fun on “Rooting for the Underdog”. And at the end of the day, in spite of its dark origins, Leaving Atlanta is mostly a collection of love songs. Some are optimistic (“Kind of Uptight”), and some are agonizing (“Careful What You Wish For”). But they’re all great. From top to bottom, this album is stacked. No longer a mere acolyte to the likes of Paul Collins and Nick Lowe, Gentleman Jesse has joined them in the masters class.