The F & L Hall of Fame: Jake and the Stiffs 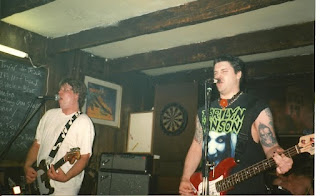 If you asked longtime Now Wave Magazine contributor Johnny Problem to name one band from our time that should have been huge, he’d tell you Jake and the Stiffs. And I would concur. If you ever saw them live, you’d be on board as well. To this day, I hear songs like “Holly”, “All I Said”, “High School Blues”, and “Jennifer” and can’t quite believe they’re not remembered as punk classics of their time! Oh well. If there’s any lesson we’ve all learned in underground music over the years, it’s that sometimes making good music is the worst thing you can do if your band wants to “make” it. There have been a few exceptions, but for the most part, quality music hasn’t been saleable on a mass level for 25 years. So why fret? Let’s just be thankful for bands who care more about making great music than they do about “succeeding”. Let’s be thankful for bands like Jake and the Stiffs!

Out of all the criminally overlooked songwriters of my time, Randy America may have been the most criminally overlooked. Even within the punk world, Jake and the Stiffs were always a little under the radar. And I think it’s because they were ahead of their time. In the mid-’90s, “pop-punk” usually meant a second-rate Screeching Weasel or a third-rate Ramones. But the Jake and the Stiffs version of pop/punk was more akin to The Dickies or The Boys, steeped in the style of old school punk and informed by power pop. If they had come up in today’s punk scene, in the heyday of Dirtnap and Douchemaster Records, they probably would have hit it big! In spite of the fact that they were a popular regional act (based out of Wilmington, Delaware and tangentially part of the West Chester, PA scene), I never knew much about them until I saw them play at the Blue Star in Lancaster circa 1998. I was blown away. They came out and plowed through song after song of super-catchy punk rock with balls and personality. They covered “Zodiac” by The Rip Offs. The bass player bled. They were everything I liked about punk music combined into one band. And they had songs. I couldn’t believe they didn’t have an album out on a big label! I tracked down their Spike 7” (which I still possess in spite of recently unloading the rest of my vinyl collection). I saw them a couple more times - again at the Blue Star and once at a pizza joint in Wilmington with The Pits. They killed it every time. A few years later, I finally got to review one of their recordings when Mutant Pop Records put out their If It Ain’t Stiff…It Ain’t Worth A Fuck CD. I fucking loved it. The Mutant Pop fan base was not enthralled. After all, they didn’t sound like Screeching Weasel.

Eventually, both Randy America and Algy Siouxcide from Jake and the Stiffs became writers for Now Wave. Man, those were the good old days! One of my great memories of that time period was when Algy made me a homemade Jake and the Stiffs comp CD. I loved that thing! That disc somehow got lost in the chaos of me moving a few years back, but luckily I was able to download the posthumous best-of Laurie’s Other Life off of iTunes. Released in 2008, it includes the above-mentioned gems as well as other should-have-been hits like “Scrappy” and the classic title track. So it’s not like this band’s music has been lost to the world forever. I was a little dismayed with the lack of information on-line about Jake and the Stiffs, so I asked Randy to compile a band discography. He and Algy put their heads together, and so here we have an official unofficial list of everything JATS ever released:

Where are they now? Randy America is currently at work on a solo album, and of course Algy Siouxicide is with the almighty Keefs. You can still stream some of Jake and Stiffs’ music at their myspace page. Laurie's Other Life is available on iTunes or from Amazon.com. And check out these clips! One is from way back in the day, and the other is from a one-off reunion the band did this past New Year!

Posted by Lord Rutledge at 2:29 PM

Explosive Kate played with those guys a million times and I swear I never saw a bad JATS show. Even trashed, those guys dropped a veritable Bomb of Rock on anyone fortunate enough to pack into the Barn Door that night. Hands down, Delaware's Greatest Band.