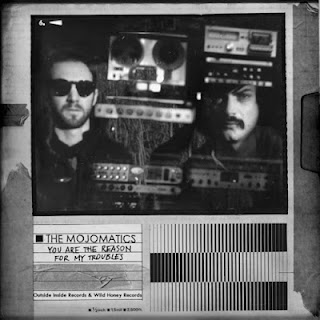 The new Mojomatics album is here! Imagine me saying that in the voice of Steve Martin in The Jerk hailing the arrival of the new phone books. I really am that stoked! I have loved this band since their legendary second album came out on Alien Snatch Records six years ago, so it was somewhat of an event to wrap my ears around a brand spanking new Mojos long player (their first since 2008). And damn skippy, I celebrated in style. I closed all the window treatments, broke out my mid-’60s vintage dancing shoes, poured myself a bottle of Peroni, and cranked the speakers to 16. And I was not disappointed. The world’s most beloved Italian Americana twosome has delivered an album worthy of the four-year wait. Mojomatt and Davmatic continue to show their love for rock n’ roll’s roots and history. They record exclusively on analog equipment, and they’ve even started their own studio label a la Chess and Sun Records. Musically, they’ve mostly shed the punky elements of their sound and have made a record that essentially ignores the past 40 years of changes in popular music. And while the influences (Stones, Dylan, Kinks, Byrds) are no big secret, The Mojomatics still sound like The Mojomatics. Again they’ve cooked up a tasty stew of hillbilly blues, country & western, bluegrass, folk, and British Invasion pop, and as always it’s their superb songwriting that sets them apart from all those crap-ass “garage blues” type groups. And from a production standpoint, this record is way beyond anything the band has done before. How did just two guys create a sound with so many layers?

Based on title alone, You Are the Reason for My Troubles sounds a little bit like a bummer of an album. And it is, but not in a bad way. I mean, come on: you can’t sing the blues if you’ve got nothing to be blue about! Hence we get songs with titles like “Rain Is Digging My Grave“, “You Don’t Give A Shit About Me” , and “Yesterday Is Dead and Gone”. Even the snappiest numbers, like “Feet In the Hole” and the superb title track, reek of heartbreak and anguish and the deep-cutting emotional damage some she-devil surely inflicted upon the composer. One man’s suffering is the rest of the world’s gain- all that love lost and general downtroddenness skillfully channeled into great songs with heart, soul, and hooks galore. Album opener “Behind The Trees” is an instant hit, radiating melancholic tunefulness a la ‘70s Stones or the mellower side of The Saints. Then the title track kicks up a little dirt on the bluesy country tip, and right off you’ve got that stellar 1-2 punch that every great album’s got to have. And while there’s nothing particularly surprising about the turns the Mojos proceed to take, this is far and away the most diverse and “mature” album they’ve ever made. That might constitute shark-jumping for a lesser band, but we are not talking about a lesser band. Give this puppy a couple of spins, and you’ll have to admit these guys are getting better. As a fan of songcraft, I’ve got lots here to sink my teeth into. “Rain Is Digging My Grave” hints at psychedelic pop with a discernibly sinister streak, while the brilliant “Ghost Story” is a piano-driven number evoking The Kinks in their ‘66-‘67 prime. And album closer “Her Song” might be the band’s greatest achievement yet- a sad & very beautiful song that Gram Parsons would have been proud to have written.

The Mojomatics continue to prove that no genre of music ever really goes out of style if it’s done right. I sometimes think it’s nifty when a band pumps new life into sounds from 30 years ago. But how about a band that does the same with sounds from 70 years ago?! Not content to just imitate, Matt and Dav are truly inspired by the great music of the past. And what they do with those old sounds is inspired in its own right! The novelty of what they were doing a few years ago now replaced by a more traditional approach to making music, The Mojomatics have grown into the brilliant band I always knew they’d become. Go get this album!