Teenage Frames are back! 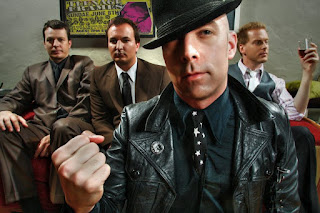 Years pass. Regimes crumble. Brown hairs turn gray. And through it all, the Teenage Frames still sound like the New York Dolls molesting Cheap Trick at the roller rink. Sonically kindred spirits to the likes of the dearly departed Beat Angels and Trash Brats, the Teenage Frames are the last band standing from the glam/punk/powerpop movement I championed so fervently in my youth. When I last reported on the exploits of the Teenage Frames a few years back, they were in the midst of releasing a series of CD EPs. The concept was that - instead of putting out albums - they'd just do EPs and make them all really awesome (yep, they thought of it before The Biters did!). We loyal fans waited with bated breath for the latest in the series to arrive. There were lengthy delays due to suspected alien abductions, dental emergencies, and certain band members exploring presidential runs. But now it's finally out! And indeed, it's really awesome! The thing is front-loaded with three pop gems that you'd describe as "potential hit singles" if it were still 1978. "Armband Manifesto" is a high-spirited sing-along with a much-welcomed positive message ("We can be what we wanna be/And we can wear it on our sleeves!"), while "I Was a Member of the SLA" is snappy bubblegum punk par excellence. That 1-2 punch alone would have been worth the price of admission, but the boys may have saved their best for third. "I Don't Wanna Go Home Yet" is probably the downright poppiest Teenage Frames song I've ever heard. It's so upbeat and catchy, it sounds like it could have come right out of a montage scene in a turn-of-the-'80s teen movie. Good times!

Seriously, these are three of the best Teenage Frames songs ever! Any of them could have been A-sides on 7-inch records. Lucky you gets three singles for the price of one! It's a deal and a steal! The "filler" ain't so bad either. "Can't Get Away From You" has me wondering how a Troggs demo found its way onto my Teenage Frames CD. And "Substitute" is a more-than-adequate cover of one of the greatest songs ever. What can I say? The Teenage Frames are aging like fine wine - or perhaps pungent farmhouse cheese that would bring Andrew Zimmern to tears of joy. Their fourth EP is their best by far! Bring on the singles collection!