Cheap Thrills are the best kind! 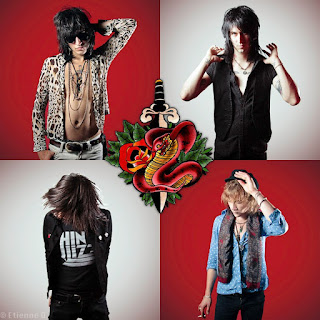 You thought I was kidding when I told you I was just getting started documenting The Canadian Takeover. But now you know better! The invaders number a great many, and they are coming strong. You are powerless to stop this siege. So just lie back and enjoy it. Get a nice pair of headphones. Brush up on your French. Grow a playoff beard. Out of Montreal come The Cheap Thrills. They are not the first band to call themselves The Cheap Thrills. But should there ever be a decisive battle of the bands with all the other Cheap Thrills out there, the Canadian crew would win easily. It wouldn’t even be a fair fight! Featuring members of the Bators, the Fishnet Stalkers, and the Heart Attacks, The Cheap Thrills play the sort of sleazy, hook-laden style of glam-punk that hasn’t really gone out of fashion in 40 years. Their musical inspirations, like their name, are what you might call “tried and true”. That’s somehow appropriate. If the likes of the New York Dolls, the Dead Boys, Boys, Hanoi Rocks, The Joneses, and ‘70s Stones float your boat, The Cheap Thrills will, uh, thrill you. The key, of course, is that they are far more than mere genre re-hashers. They do the trashy rock n’ roll thing really well. Guitarists David Hener and Sam Gimme have a wildfire Thunders/Sylvain type thing going on, and Hener on lead vocals is more than a little reminiscent of Stiv Bators (in an entirely good way). Most importantly, these cats have tunes. Signature number “I Gotta Get Away” rides the fine line between back alley proto-punk and the anthemic side of Sunset Strip sleaze, buoyed by guitar hooks that never quit and a rollicking, catchy chorus. “21” is more of the same with a heavy injection of power pop, and at this very moment it’s lodging itself deep inside my head. Remember a few years back when bands like Plastic Letters and Soda Pop Kids were a going concern? If you remember that scene fondly, you should be all over The Cheap Thrills. If you don’t, well, that’s okay too. Remember Loose Lips? The Slash City Daggers? The Richmond Sluts? Stop me before I name every glam-punk band of the last 15 years! The Cheap Thrills rate with the best of ‘em. Debut EP out now!