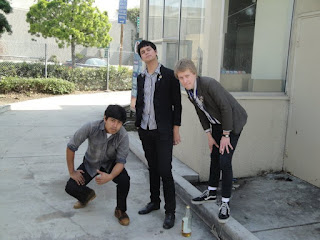 If you think “L.A. power pop”, the first thing that comes to mind is probably a bunch of douchey wannabe rock stars with hipster haircuts and a 16-page press kit. But Images are nothing like that. Imagine instead a band that just stepped off a time machine from London 1978, where they opened for the Buzzcocks and The Jam (with a stop along the way to 1985 where they picked up a copy of The Descendents’ I Don’t Want To Grow Up on vinyl). Here’s the funny thing: in 2012, they actually are opening for the Buzzcocks! It’s stunning that this band has been around for YEARS and had somehow evaded my radar until now. Within the punk/power pop genre of music that I’ve been championing since the mid-’90s, this is easily one of the best groups I’ve heard in a long, long time. Formed way back in 2004, Images suffered for years through the common problem of not being able to find a permanent drummer. They fixed that issue three years ago when singer James Carman took over behind the kit. Images forged on as a power trio, and they most definitely have flourished since then! Hit ‘em up at ReverbNation, and you’ll be treated to some A-quality tuneage like the high-energy jolter “Frustration” and the wistful pop gem “I Know That It’s Alright” (shades of the Exploding Hearts!). Brand new 7-inch Thought Patterns is a split release on 45RPM and Under the Bridge Records. And with songs like “Shivers and Scars”, you’ll get to hear what pop/punk music is supposed to sound like! Having had this little taste of Images, I want more. I want a lot more! After eight years, they’ve got to have an album or two or three written by now. Someone sign these kids! They’ve paid their dues. It’s time for world domination!