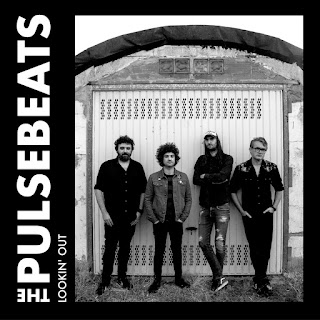 The Pulsebeats have taken the garage/punk/power pop universe by storm with their recent track "(She Sings Like) Joey Ramone". Well I am here to tell you that that song is no aberration. From start to finish, The Pulsebeats' new long player Lookin' Out is an absolutely killer release and easily one of the best punk rock albums of 2021. Based out of Santander, Spain, this foursome has been around for over a decade. But Lookin' Out totally blows away the band's previous output. This is that rare  "classic punk" album that manages to sound new and fresh in modern times. On these 13 tracks, The Pulsebeats combine the influences of '77 punk, power pop, and straight-up rock and roll to form a sound that is both familiar and unique. I can pick up on some key influences in spots (Buzzcocks, Dictators, Marked Men), but I wouldn't say The Pulsebeats sound like any other band out there. Lookin' Out hits the mark with '77-style toe-tappers ("Skipping Stones"), racing punkers ("241259"), pure pop songs ("Life As a Movie"), garage bangers ("Hot Glue It!"), and everything in between. Loosely based on the concept that society suffers when individualism gets out of hand, Lookin' Out is full of reflections on our modern world. But it will also hit the spot if you just wanna crank up some high-energy music and jump around. If you like fast-paced punk rock with lots of melody and plenty to say lyrically, this album ought to be on your radar. It's out now in Europe on Folc Records. American release on Rum Bar Records is coming at the top of 2022!
-L.R.
https://thepulsebeats.bandcamp.com/album/lookin-out
https://rumbarrecords.bandcamp.com/album/lookin-out
https://www.facebook.com/thepulsebeats/
https://www.facebook.com/RumBarRecords
https://www.facebook.com/folcrecords
Posted by Lord Rutledge at 6:44 AM